Wardhill A Pledge To Lava 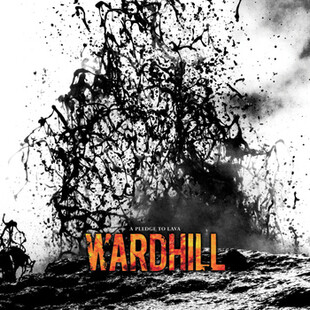 Swedes Wardhill have got a bee in their bonnet.

It's a bee that's obviously causing them discomfort as A Pledge To Lava starts with some crushing stoner-styled sludge with some immense gravel'd up vocals that you'll dig if you're fond of Bongzilla or bands who let men with variously scraped larynx bark over their music in general.

Coming on black-flecked orange vinyl, the aesthetic is there when it comes to lava, but this is lava speeding rather than oozing over rocks in a slow deliberate path. It's pretty breakneck and there's some crusty influences in there too, I'm imagining hordes of black denim and unpleasant smells emanating from these guys.

The forced and pained vocals are what lead this, as well as the pinpoint riffage going on, there's no staid or laboured repetition here, rather tight and regimented bars of head-nodding goodness. The singer knows when to shut up as well, it's quite a common mistake to think everyone wants to hear your tortured screams over everything, all the time. We don't, it's what you leave out as well as what you can screech we want to hear just as drummers don't need to be spinning sticks or filling every gap with a rolling cacophony.

They do however slow things down at points, like on the fantastically-titled Grimsvötn which drips with a filthy sweat, the kind that miners or oilfield workers might suffer from, greasy and pretty disgusting.

Take a listen and witness for yourselves a rise above generic sludge for once, well done Wardhill, well done.

Forums - Reviews and Articles - Wardhill - A Pledge To Lava