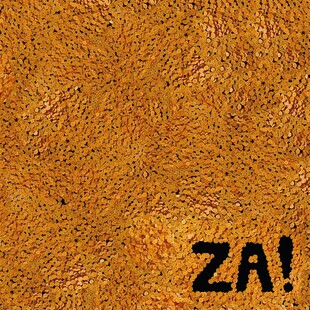 Za! make a hell of a noise for just two people.

If their name is a take on the hyperactive Italians Zu,then they differentiate themselves enough for that to be forgivable.This Spanish proposition come in full digital pink, business at the front and party in the back too.

Camp circuit-bent and video game sounds come forth over pretty handy drumming and it shifts so much all over the place that you'll be wondering where they go next. Like a broken disco ball at an imitation All Tomorrow's Parties weekender you'll hear hints of less interesting bands in there but it's pretty unpredictable and haywire stuff. One moment they are drumming along to what sounds like a clinical heart monitor, the next they might be doing some sort of group vocals that make them sound like the strangest monks in the world. I've no idea if they are linked to the excellent Grabba Grabba Tape from Madrid at all but they are of a similar skewed Spanish lilt.

Keeping track of what's coming next should be shelved right away as a matter of course, bent notes fly at you before falling over and being sick on themselves.This is with all with a veil of brash, intense intent that I imagine makes their live shows seem like controlled chaos, but I can also imagine glitter being thrown about or some sort of shadow puppet show performed behind the bass drum skin.

On Súbeme el Monitor they manage to sound like a Mariachi band melting under strip lights before heading into a vocoder-led descent into their own psyches.They then flip that on its head during El Caliento #3 where they seem to be conducting some sort of naming ceremony on the surface of an alien moon. Then the influence of scratch-turntablist Kid Koala rises up on Mr Reality taking lounge jazz into a squat for a boogie. What I'm trying to get across is no two tracks sound the same and may send you slightly strange. I'm sipping some fruit juice here and I can't tell what flavour it is any more.

It's limited to just 100 LPs so I'd get on this as soon as you can really. They are playing the Audacious Art Experiment's 10th Anniversary weekender, so get to that if you can.

Oh also, buy it here, it will be the single most unique record you do this year.