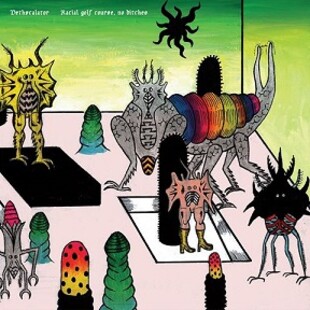 It begins with Black Percy, a raucously rocking, full throttle fast riffing beast that sounds like a bull in a motorcycle engine repair shop. The vocals are spewed out, barely ennunciating a syllable, with an urgency that suggests they're better out than in. And then it's all over before you've fully registered how good it actually is. You play it again to make it clearer.

What isn't apparent then is that is as straight forward as it gets, that the distortion drenched lunacy is the most hinged Dethscalator manage. The band openly embrace the angular and the experimental, making noise with half riffs, grunts and feedback. It's always interesting, if admittedly often annoying. The ending to the A side is a case in point - the guitar strings are battered on Felt Leg, in what first bizarrely reminded me of a split second snippet of a Brian May solo, like the Flash Gordon soundtrack stuck on a half second loop in the tape deck of Black Flag's tour van, while a roadie is being violently sick in the back. Midnight Feast then promises much with a gloomier denser fog of distortion clouding the mood.

The B side opens with the menacing hardcore of Aids Atlas, and the vocals become even more desperate sounding. There's more focus to the mania on this side, with a notebale darker tone - where as you can sense the enjoyment they get from baffling you at the start, they progressively seem more pissed off, attacking each track with everything they've got. It even goes doom-y, on the slow Shit Village and the slower (and riff-repetitive) It's What They call the Clubhouse, Arsehole.

It's no shock that they've paired up with Hey Colossus to split a vinyl release in the past - this shares their bold adventurous noise mongering, and places them alongside HC's peers such as Lords and Part Chimp, with the innovative hardcore base mingled with punk and metal slabs. The awkwardly titled album (both grammatically and in meaning), and the bonkers artwork betray what follows, and it's a fascinating release, one which, needless to say, won't be for everyone, but will provide a thrill for those who like a challenge.