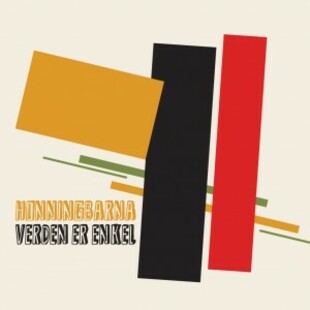 Honningbarna, there’s a mouthful for you, it means Honey Children in Norwegian and it’s also the name given to a band that look like the Inbetweeners; they are Norway’s punk god-children, singing completely in Norwegian and adding a good dose of fire to the party, they are quite a force to be reckoned with clocking up awards and providing an earth-shattering, tour de force of Norwegian, post rock, punk.

Tragedy struck Honningbarna pretty deep in January 2012 after losing their drummer Anders Eikås in a car accident, the band continued on and released a banger of an album, Verden Er Enkel.

Released in April 2013, this wrecking ball punk opener has all the vigor of early Fugazi, titled Dodtid this song opens with a Mortal Kombat style announcement then blasts into some catchy, well crafted and seriously powerful stuff. I would assume The Hives could only match this type of energy both live and recorded.

Ikke La Deg Rive Med squeals in next with some ferocious feedback as well as the indecipherable lyrics. The riff comes in next and sounds like that Ocean Colour Scene riff from the Riverboat Song, albeit on steroids and fucking your girlfriend at the same time. It’s short but sweet but does capture a small dirty window into what Honningbarna do.

Velkommen Tilbake begins with a stabbing guitar riff that quickly evolves into some clever chord progressions and starts to stomp like fuck all over a stereotypical punk formula. Clean and dirty mixed with speedy guitar runs and gang vox L.A.M.F.

The next track creeps around with some early ACDC/U2 delay work, this is often a bad move for some bands but these boys have practiced this one, I’m not going to even attempt to decipher what the songs are about, this one is called, Tynn Is. Further along in the track the band start to stomp back into their own style of thrashing punk rock. It’s nice to hear something different finally being injected into the tired old stuff we’ve all heard before.

Fritt Ord Fritt Fram blasts in next with the intro vocal that, what I heard was ‘BLOODY HELL’ I know I’m wrong, but it did make me laugh and you might too... this is another short but sweet explosion in your ears. Catchy guitar riffs that contemplate the vocals with gang chants in the back, this is shouting at its finest.

Detuned riffs and harmonics introduce the mighty God Jul. Jesus next; this track follows a different formula to previous tracks. Here is where the vocals start to really show their worth, mixed with the rest of the gang vocals, this track works and works well.

Sinna Dame is next, a weird sample is all it is, sounding like a Norwegian female teach bollocking someone. Again, I don’t speak, nor do I intend to, Norwegian.

Next up is Fuck Kunst (dans dans) this comes in with the same formula of tight guitars and interesting overdubs, this band have a lot of talent, my only gripe with the track is the hand claps, I fucking hate that shit. Punks seem to love it so that’s probably why it’s here for everyone to hear.

A similar track intro comes next for Offerdans, I can only assume that the band have written and recorded this album in the same order. The same gang vocals and similar chord progressions here, short and sweet again.

Ned is the term used to describe Scottish scallies, here it has a new meaning, screaming and creepy organ based riffs. Odd timing and curious organ use, this band really know how to put a spin on the stereotypical punk layout. Screaming is in abundance in this track, call and response between gang and lead vocal really makes a difference.

Si Nei comes next, effects splattered guitars and mellowed vocals and sound, this is a track that could easily be included on a playlist, thrashing into heavier chorus’ these boys have clearly practiced this stuff into the ground and it definitely shows.

One thing that I was pleased about with the download I received was the fact that each track translated into a jazz ensemble picture that had no relation to the band whatsoever on the media player box, very nice!

The album’s title track comes up next and retains the same force of the opening tracks, punk made differently; I think there may be a child doing some vocals at some point in this track too. Different strokes, different folks.

Gi Oss Kick is the albums closing track, obscure guitar lines and odd bass patterns coupled with drums that make no sense and vocals that baffle me, this is the jewel in the bands crown, screeching guitars break the monotony but it falls back into the primus-influenced melody. Not bad going for some youngsters in Norway.

If The Hives were too soft for you, these chaps will slap you... hard.