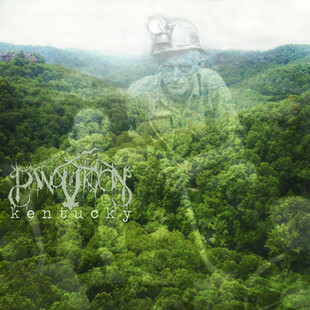 Occupying the same 'What the hell?' corner of black metal as Botanist, Panopticon have decided to merge heavy bluesgrass elements in with the usual blastbeats and dual harmonized guitars. Possibly not quite as radical as a distorted hammered dulcimer but eyebrow raising nonetheless.

Kentucky is a concept album centred around the coal mining industry and communities in and around the Appalachian mountains. Typical black metal sections are juxtaposed with banjo and fiddle breakdowns and spoken word parts where vintage recordings give insights into the lives of the people who mined coal in the state.

Occasionally the styles will be weaved together, such as the tin whistle and violin counter-melodies sitting beneath the distorted and screamed backbone of Bodies Under the Falls, but mostly they'll be more compartmentalised which sometimes leads to jarring shifts between sections and songs.

Beyond the novelty of the approach, the songs themselves are excellent. Black metal can seem like a limiting and insular style at first but the boundaries are no more difficult to push than any other genre and Panopticon adds enough to the core sound to keep the longer songs interesting throughout. In fact, the first few minutes of Black Soot and Red Blood (the second of three 10+ minute tracks on offer) should be enough to grab anyone curious enough to give this album a try for this exact reason.

The spoken word bits are slightly ruined by a Youtube comment saying that they reminded a viewer of one of Grandpa Simpsons rambling monologues, and since then every time one has started up all I can hear is a man with a thick Southern accent talking about wearing an onion on his belt. Thanks internet. Still, despite a few bits where everything doesn't quite fit together as well as it might, Kentucky is an impressive achievement, especially considering it's almost entirely the work of one man, and works much better than you'd think it should, going far beyond mere gimmick into something special.