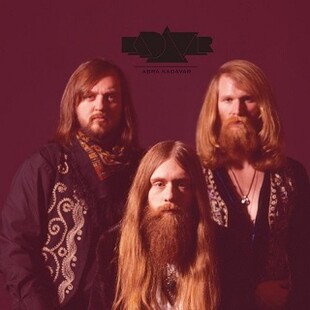 Kadavar are back, bushier of beard and presumably smelling mustier than ever judging by the retro sheepskin coats on show that you'd find in some hole of a shop in Afflecks Palace or Camden Market. It's a welcome brusque return - only a matter of months has passed since their self titled debut landed and boogied it's way into many a end of 2012 best of poll; it is hopefully a return to the frequent turnover of albums from the era they idolise, where quality did not suffer at the hands of quantity, but instead fed from the momentum (as in, for example, Sabbath's first few records).

The brilliantly monickered Abra Kadavar has a slightly looser feel to the debut, but in a confident, comfortable in their own skin fashion that really opens up more of the tracks than previous. Doomsday Machine is brilliant, building up into the choruses excitingly, while Black Snake reminds us that a doom heart pulses at the heart of Kadavar - this is no classical rock whimsy, as the head nodding riffs demonstrate. The album gets spacier towards the end, with organ input and trippy vocal effects; not the most unexpected of changes but allowing vital variety before it is left to drag.

As with the self titled, it's not perfect throughout, with dips in interest as you listen, and it doesn't blow me away with bold moments to cherish. But it doesn't seem to matter - the album as a whole seems like an event, a relaxed enjoyable aura of cool that is fun to chill in the glow of; an album to own in physical form, and to play whole from start to finish.

A switch to Nuclear Blast, currently seen hoovering up all the best doom tinged psych heavy classic rock acts like it's going out of fashion (ironic for a sound borne out of the love of an era at least four decades gone) will presumably help increase exposure, and with Abra Kadavar they have a more than able vehicle to maintain that precious momentum.