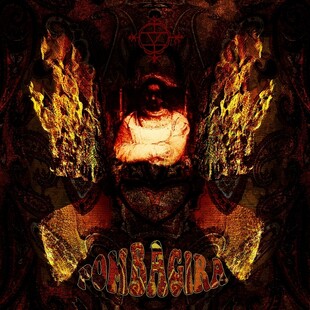 Pombagira are back once again and this time they are creating a more churning and experimental tip.

No longer simply obsessed with volume (although it's here in spades) this has taken on an almost world music influence. Eastern scales haunt the quieter sections of this two track album, with percussion sounding similarly off-kilter and warped. Vocals are soaring and majestic and it takes on a vortex-like prog element at times too. Imagine if Acid Mother's Temple discarded the psyche overload and took on a more focused tip and that's what Pombagira have here.

Samples of birdsong chime with the pastoral and more relaxed feel to the album and at times you have to remind yourself this is the same band who are used to loosening plaster with sheer weight of sound. Dare I say it, but there are shades of Arthur Lee's Love in there as well, the free-spirited quieter sections would be as at home in a hazy field in the 70s as it would be in a grotty toilet venue down a back alley in South London. Truly game-changing, if you thought you knew Pombagira before, then prepare to have your perceptions shattered.

Second track Grave Cardinal brings in more downtuned distortion, but retains this other-worldly and more ebullient style that's perhaps further confirmation that the band have turned a corner. Sounding sinister, yet thoughtful is a difficult trick to pull off, but I'd say Pete and co have cracked this particular nut. Live this must be a dizzying experience, bringing to mind pillars of smoke, unseen faces in the forest and all sorts of occult imagery.

It's no surprise to find out this was recorded at the fantastic Foel studios, but how much praise does one studio need? If you don't know the epicentre of the UK's recording talent, go and look them up now and see the list of recent visitors, it kind of speaks for itself.

Sometimes bands take a few albums to find their stride, but Pombagira hit theirs long ago. This is their fifth album in as many years and they already sound like two incredible bands. Let's hope this is the start of a wildly creative period.