Burden of the Noose The Forgotten Plague 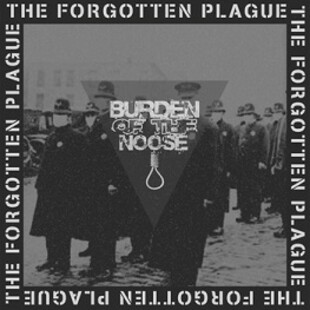 Sludge in the UK is riding a creative and well supported wave at the moment. For a scene that was seemingly dead in the water only a few years after the demise of Iron Monkey, with only a handful of bands doing anything at all, and a sound seemingly exhausted of ideas, it's incredible to see the explosion of ugly disheveled sludge around today. Burden of the Noose are an addition to the current trend, the Birmingham four offering this EP up from the brutal end of the genre.

The Forgotten Plague showcases a reminder of the potential harsh bluntness of sludge, which, for all the bleak imagery, downtuned vitriol and guttural despair, often contains a fat slab of groove running through it, and from Bongzilla to Bumsnogger, whisper it, a dose of maniacal-grin inducing fun. Burden of the Noose largely stay away from this heresy, with songs like Bitch Goat simply angry and grimly straightforward. I don't think it's for the lack of trying, but with lead vocals that are pure death metal - more Chris Barnes than Johnny Morrow - most attempts at groove are quashed. The EP lapses at times into the formulaic as a result, although it should be noted that backing vocals, of the throttled scream (a la Wizard's Beard) type, add variety nicely.

When they get it right, such as on the excellent Funeral Witch, they really shine. This has groove in abundance, bringing to mind EyeHateGod or Weedeater. Not that deference to American influence is essential, or the defining characteristic, more a note on the high standard attained. The EP is reminiscent of Northern aggressors such as Volition or Limbic Riot in it's uncompromising approach, no doubt taking influences from beyond the confines of the genre, dipping their toes in the murky pools of various extreme metal sounds.

Burden of the Noose are another worthy blackened soul that bolster a burgeoning scene. Lacking range in the lead vocals and a touch of invention in sound - the occasionally generic bludgeonry - they aren't up there with the best the UK underground has to offer right now (eg Iron Witch, Limb, Slabdragger), but there's definite potential highlighted in the high points and The Forgotten Plague will win them many fans.

Forums - Reviews and Articles - Burden of the Noose - The Forgotten Plague