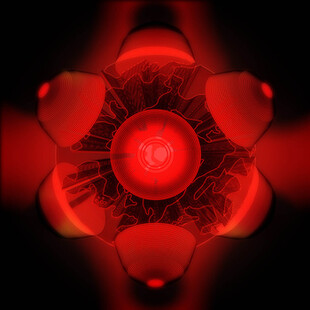 Slow Worm, I’d be slightly worried if worms were fast... that’d be more terrifying than a sluggish little earthworm that dragged itself across the garden. Now then, Slow Worm are here offering a different take on Doom, they are combining a special dose of rumbling Doom but adding a shoe-gazing, atmospheric, catchy vocal aspect to it as well... and some black metal.

As far as I’m concerned, this band are blending Cave-In with Pelican and hinting at Norwegian black metal. I do get sick of referencing Pelican, but it seems that they have crept into everyone’s sub conscious when they are writing big noises. When the opening track of the 2-track EP gets a few minutes in, Slow Worm resort back to almost black metal style screaming and guitars, they seem to have covered a lot of ground within the first track already; quite interesting.

The opening track blunders on regardless titled Macrotrophia; with Boris-style vigour and vocals to match, the bludgeoning doom behind it continues. This first track has left me confused and somewhat perplexed, this would seem to me like the ideal band for schizophrenics.

As the second track; The End That Never Begins (King of the Cosmos) lumbers in, the band follow suit with long, drawn out notes that engage the listener and briefly mix relatively upbeat key changes and then switch back to the same formula as previously tested.

Once the track roars along for another couple of minutes, you get much more of the same doomness with the added aspect of a bit of progressiveness and a few lead guitar parts. Quite a refreshing aperitif, before more black metal screaming that swings in like a night terror; Nice.

Are you into doom and the occasional fling with atmospheric shoegaze stuff? Living with someone else inside your brain that loves a bit of black metal? This is your band, follow them and kiss the ground they walk on.

Buy their stuff first though; you don’t want to get caught short with not knowing each and every part of the second track that clocks in at 8:31.