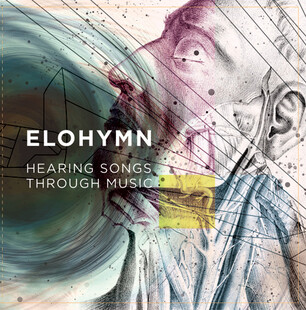 If there’s one thing I hate, its band names that I can’t pronounce or read properly, probably why my death metal collection is so poor, I like bands that I can read the name of, Humble Pie, Pink Floyd, Cavity, Clutch and so on.

Now, I have an interesting band going through the old Marshall headphones this Saturday morning... Elohymn, as guessed that little red squiggly line appears under their name as I type.

First impressions as the opening track, Stranded begins are that of unexpectancy, a sample of a placid man probably from some obscure film creep in as the band begin to weave their own brand of post rock with added guitar synchronisation.

I struggled to follow a lot of what was going on in the songs, in parts it would blend minimal guitars with over-complex drums and then switch everything around. I dig a lot of creative things but the when it comes to guitars, I need a bit more than one note to keep me hooked.

The opening track does have some heavier parts in there too, these are few and far between, I think many will agree that it’s not quite the sonic wall of meat that we all know and love.

Optimus comes in next with a staggered bass line and fantastic drum patterns, this track is much in the same vein as the previous track; speed picking is lower in the mix which always works well for that oh-so-cool atmospheric edge to pieces. I can’t help but hear indie edges to this, I know that might seem like a low-blow but there’s definitely something of that ilk going on here.

Elohymn seem to have a unique post rock, progressive, instrumental thing going on, there is no real comparison for this band, some of their freak-out sections that never sound as if they’re crow-barred in, give off a slight air of Humanfly’s Awesome Science albeit with more computer space noises.

The next track mellows itself in with Am I happy? Am I Sad? My guess is; both. The track contains another sample; this one actually works without pointing the pretentious finger and fades out in good time. The jangle of guitars with slowed drums works as the track builds to only fall back into its original pace, lovely stuff.

Strongzombie is the next offering on the EP, are zombies hard? I reckon I could probably take one on in a pub car park style brawl, then again, if I’m bitten, I’m fucked. I guess if I had a bat or something I’d be ok. I don’t think I’d use this track to fight too though, much too complex. This track is bordering on math rock in parts which adds another string to the bands proverbial bow.

Plenty of drawn out feedback and delay, I often wondered with bands like Elohymn whether or not they could continue doing what they do if there was no such thing as a delay pedal? Anyway, another sample appears later on in the track to introduce the heavy part of the tack which is slightly pelican-esque in parts but still lacks in the massive sound that I believe the band are going for...my one grievance is the Digitech Whammy pedal...I don’t think I’ve ever heard anyone bar Tom Morello use one and produce good results... then again, you’ll never know if you don’t try.

If you dig instrumental, post rock with proggy outbursts and electronic witchcraft, then get a copy of this purchased, the packaging looks delightful and will cost you less than two beers and last longer, if you’re flush, buy both and consume simultaneously!