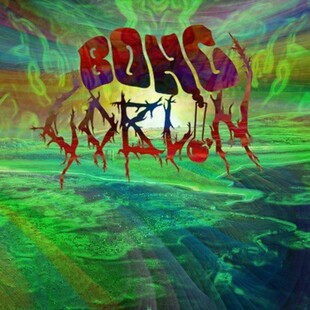 If you’re reading Ninehertz (a site well known in the past for its stoner, doom and sludge reviews), took the time to click on a review for an album by a band called Bong Goblin, I'm going to assume you’ll have a good idea what this record sounds like. And yes, you’re correct, it sounds exactly like that. But wait... there are a couple of faster thrashy bits and psychedelic elements thrown in too!

Buddy Waters reminds me of my late teens. Sitting in a park, sharing a teenth with some college band mates, having a laugh and chatting about some of the songs we’d like to cover on our music course. The pure riffage parts could be off an Orange Goblin album, the visceral vocals on the heavier bits would fit in on an Iron Monkey track, and the faster sections remind me of later Carcass stuff. All of those bands we tried to cover, with only Orange Goblin being deemed acceptable by our teachers; who really just wanted us to play MOR songs with showy off time signatures and solos. Whereas, we just wanted to rock out and have a laugh. And I assume this is what Bong Goblin are going for.

However, for the fast approaching thirty year old who hasn't listened to this sort of thing for a number of years, there are only a few occasions where my ears really prick up and pay proper attention. The psychedelic sections add an interesting dimension to Bong Goblin’s sound. Guitars go weird and, well, psychedelic and the vocals sound stretched and messed up; the middle sections of outro of The Wizard’s Brew being perfect examples of this. I wish there was more. The EP's highlight, The Goblin's Cave, comes in the form of an acoustic track that could quite easily be the intro to the next Pallbearer album. It’s interesting, morose, gloomy, and eerie.

For listeners who enjoy jumping into the buddy waters and drinking mug after mug of the wizard’s brew, I'm sure you’ll find much to admire in this EP. If you only dip your toe in, or take the occasional sip, give it a go and see how you get on.