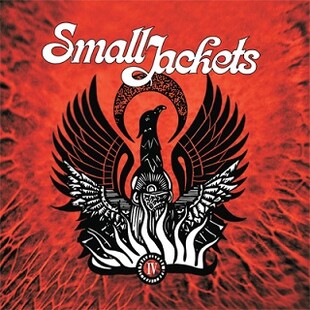 Small Jackets are another name from the European stoner rock fraternity that I've seen on gig flyers supporting American heavyweights, promo spiels from small labels or perhaps on a t-shirt front at Roadburn, without having managed to catch up with their music. Reviewing tasks you with the responsibility of checking out such bands you've previously not got round to yet, and it's always an exciting prospect. Especially so here, hailing as Small Jackets do from the seemingly tight knit and productive Italian scene.

Small Jackets are unashamedly classic rock, something immediately apparent. It's a bit of a let down for me, this not being my thing - the closest (modern) band near this I can cite as a personal thrill would be Gentlemans Pistols - but that's lathered in irony and tongue-in-cheek cheekiness, which is missing here. You can't be into stoner or doom and credibly moan about a musical style that has no modern influence or unique invention, but classic rock crafted in the present day takes things too far.

That being said, if you can stomach those issues, or more importantly openly embrace them, then you'd do a lot worse than check out IV. It's brazenly cocksure, with early Aerosmith influences abound, plus hints of southern boogie such as Lynyrd Skynyrd or ZZ Top, exacerbated by the occasional harmonica and organ, raising a more contemporary parallel to Five Horse Johnson.

Produced well, with nice guitar solos in check, it's a fine piece of 70's veneration which would go down a treat with the bikers and dads at one of those Hard Rock fests at Butlin camps that are currently in vogue. Despite the vocals adding to the cringe factor here and there across the ten tracks, I am actually warming to it ever so slightly as I'm reviewing it - reminiscent of Bad Wizard perhaps. If that sounds like something you'd relish, check in here.