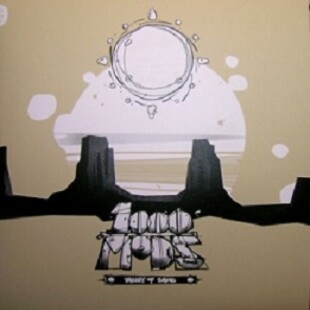 Anyone conjuring images of Phil Daniels in Quadrophenia stop now, 1000 Mods hail from Greece, not the sands and pebbles of Brighton. Not that the desert and Western US influences strewn across the title, artwork and, ultimately, music would help identify their origin either. Valley of Sand is a four track 12" released to coincide with an imminent Eurpoean tour, with appearances at Desertfest giving further clues as to their sound.

The title track takes up one side of the vinyl, leisurely strolling in at seventeen minutes-plus length. It's a mellow trip, a smooth drugged jam session more akin to an early Jalamanta-era Brant Bjork dune jam than the heavy bass groove of his former outfit. Further more, this has its roots based in the San Franciscan sound of yore, the acid psychedelia trip keeping things smooth and dreamy. Modern pointers would be Wooden Shjips or Dead Meadows, rather than the heavier, blunter stoner rock outfits from California.

The flip side contains three live tracks, all originally found on their 2011 album Super Van Vacation. Not being a fan of live music on record, this holds significantly less appeal, but the recording is relatively clear allowing it to act as more than just "something for the fans". The trio illustrate a more straight up 70s hard rock/stoner rock history to 1000 Mods, for better and for worse. 7 Flies and Navy in Alice are okay, but the closing Track Me is the pick of the three, fluidily mixing the styles seen thus far, with psych guitars and trippy solos, leading me to check out the Billy Anderson-produced album on bandcamp.

While doing a job in piquing my interest in their originating work, I'd rather have had another new track in the vain of Valley of Sand than live tracks, to get truly charitable in my platitudes. It's entertaining never the less, and worth checking out for the mellifluous A-side alone.