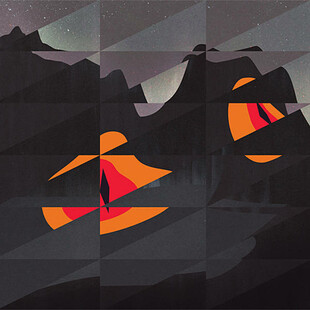 Aentertainment have brought two ambient/drone artists together on ten inches of wax and it's obviously lovely. Petrels are part of the Devonali Records family, meaning they share artistic vision with the likes of The Samuel Jackson Five, The Pirate Ship Quintet and other spine-tingling artists. Their side of this split is a clean, pastoral-sounding piece, composed of high-pitched drones, the sound of dripping water and the odd occasional ghosts of percussion. There's also muted samples of birdsong or wildlife there too, giving it a peaceful, non-threatening feel. So much drone can be oppressive but this serves to relax and soothe. The percussion that haunts both the start and the end of Xolotl singes the carpet sounds like the insistent drum pattern from Kraftwerk's Trans Europe Express giving it that feeling of a long, but steady journey. The click clack of the rails giving it a purposeful direction.

Bolt take up the other side with then ten-minute ( 1 0 ) which is an exercise in feedback and delay overload. Notes are picked around a scale as dark waves of feedback are stretched over the whole track. You can almost see the black, acrid smoke pouring out of this one, its got a thick and unpleasant sound to it that will make you wonder why two such polar opposite artists found each other. It's a ying and yang style release, cathartic waves of depression on one side, peaceful mewlings on the other. It's worth a listen for those who value their ambient offerings but also could be held up as an example of how much variation there is in a genre so often castigated as a singular and one-trick pony.