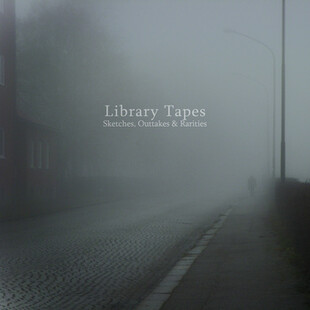 Sketches, Outtakes & Rarities by Library Tapes is vastly different than the Les Revenants solo project by David Wenngren on the same label (involving the same David)? a more traditionally 'musical' record with lots of classical or modern classical tiny musical snippets and short cinematic pieces, Its actually really nice and incredibly eerie. Namechecks Erik Satie- so that's something to go off to flesh out the world of Library Tapes.

It's like the soundtrack to a Scandinavian detective series. My favourite track so far being Utdrag ur Djävulens Öga which would be the final scene where the protagonist in a bulky cable knit jumper drives a Volvo of a cliff into a freezing cold angry North Sea.

On the whole I can see where the two releases on 'Library tapes' fit in together, both creepy, nostalgic and haunting but Sketches, Outtakes & Rarities has slightly more drama and interest in it than Les Revenants so for me was the stronger of the two from the same imprint.