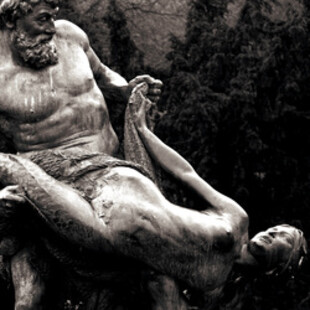 Aidan Baker, normally of Nadja, also has the freedom of going solo now and again. The ever-reliable Gizeh Records sent me this about a month ago and to be honest I've had trouble finding the time to absorb this release fully. It's not that I haven't listened to it, it's just it's such a deeply sad piece of music I find it difficult to listen to all the way through without becoming withdrawn and melancholic.

Inspired by myths about female water spirits, the tracks on the album apparently '...are much more structured and song-oriented, embracing a minimalist post-rock, slowcore style' so says the blurb.

I'd agree, the ghost of Codeine and Idaho hangs heavy over the slow, self-regarding pace of the songs and there's a passive nature to a lot of the instrumentation here. Where the songs stand out are with each vocalist's contribution. The opening track is like an existential resignation that life has been lived and the inconsequential has taken over. Clara Engel's vocals veer between smoky jazz-esque tones to a pained and anguished wail. The lyrics are of losing love and feeling its effects immediately, pretty harrowing.

30 Days/30 Nights is a more muted affair, strings fumble in the background for a while before coming together in a sound that could soundtrack a mid-afternoon black and white film. This is not an album to play when you're drained or low, it only enhances this mood. It's grey and solemn, but underneath that it's also cool, self-assuredly so. This track in particular has much in common with Enablers, the spoken vocals taking clear focus and operating as poetry with a soundtrack.

Free jazz experimentation and swirling vortexes of voice take over in places from here, but it never picks up anything but a snail's pace. This is music to wallow in, the compositions ooze cool but having a different lyricist and voice to each track gives it a fresh and inviting feel each time a new one starts.

This could be Baker's best work to date, perhaps not in terms of a cohesive whole, but certainly in terms of composition. It's almost as if his minimal work previously has been leading to this point, as if existing for years on the periphery and suddenly coming into view screaming 'This is what I can do'.

Not one for fans of his more esoteric work, but what a fascinating piece of art.