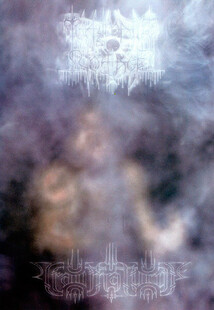 German black metal is not something I'm familiar with. US and Norwegian material is more my bag. Bleak and frostbitten is how I like it. The exception is the unusual and prog/psyche-ridden Meads of Asphodel who are a British duo who have created some of the most strange, inventive heavy music of the last few decades.

Traumatic Voyage are as close to Meads as you can get, however their sound lacks a lot of the sophistication that band displayed and that was over ten years ago. With only occasional variations in dynamics it makes this a difficult listen and being spread over two discs it's not a short one either. The endless barked vocals are intertwined with a vibrato-heavy backing vocal for many of the tracks along with a desperate-sounding female vocal that gives it a gothic feel. It's by no means bad, but suffers from a real lack of variation. They move in awkward jerks from section to section with no warning and not in a comfortable fashion either.

This is the work of a duo whose imagination seems limited. Moving on to the second disc doesn't appear to make much of a difference. A quiet, mournful intro moves into a choppy black metal section in the blink of an eye far too often and vocals hold no clarity, breaking constantly between a snarl and a scream with no clear lyrical themes popping out at all.

I despair that this is not as fully-formed as it should be, there's ideas waiting to break out from under its surface but it perhaps needs some serious rethinking to have any effect for future efforts. Unusual electronics sneak in now and again but offer nothing that grips you. I honestly feel as if I am listening to the same tracks over and over again and I'm slowly glazing over. A shame then.