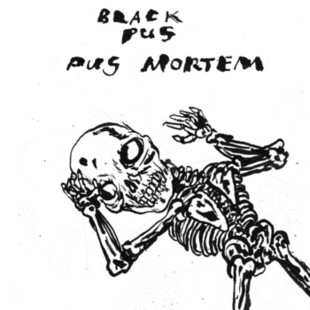 Black Pus is a distinct solo project for Brian that has been going since 2006 and is very much of the same ilk as Lightning Bolt which from the sounds of things are intertwined entities with hours of Lightning Bolt out-takes and jams still hanging around on Mr Chippendale's computer adding to Black Pus. The general gist around the internet is that Black Pus basically just sounds like Lightning Bolt but without the incessant widdley riffage of bass guitar over the top- this is actually a pretty accurate description but hey! Scuse (yet another) pun but I suppose there is less bile in Black Pus than there was in Lightning Bolt, so has an added air of jollity and frivolousness. The vocals sit higher in the mix and the lack of the pulsating low end from the other Brian allows for a more playful sound.

Like Lightning Bolt, Pus Mortem has a DIY approach- as a band they were sceptical of their own success, playing large rooms never sat well and in one WIRE magazine interview years ago said that they weren't really happy playing the boozy ATP rubberneckers they were attracting (people they couldn’t see themselves being friends with), so back to the galleries and reclaimed spaces of Rhode Island.

The stand out moments of this record come in the form of Play God which builds on the bounciness of the first few records by being really fun and ‘party’ as well as the dubbed out cacophonous finale Meet Me In That Other Place.

Brian Chippendale has an interesting and unique process, Black Pus is an extension of his artistic practice and alongside the visual art element demonstrates a creative whole and it simply couldn’t be anyone else, tell that to Mike Judge- this is how you do solo shit.