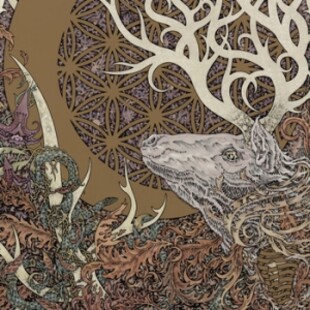 It's been seven years, SEVEN since the first CTTS album, so this release hangs heavy in the air frankly.

Famed for their ridiculous song structures and overblown lyrics that straddle the lines between profound and lovelorn teenager, time has not dulled their fervour.

They released an EP of the first half of this album

Opening gambit Enter By The Narrow Gates crams in epic and a whole novel's worth of imagery into its seven minutes, before bursting into the trial by fire of Spirit Narrative which shows they are still raging on and on. It's music that elevates the more you listen to it, no mawkish elements are here like on the debut, it's more heads-down, let's get through this in nature.

As a result there is a lack of the crazy interplay that made them a totally unique band a while back. Bands like Kylesa know how to do the marked difference in vocals. On 2004's As The Roots Undo it sounded like a manic argument between two tweekers over the last snifters of paint in the can they were huffing, it now sounds like a ritual, totemistic and straining with veins bulging. If you weren't into the vocals before, you may dig this if righteous screaming/screeching is you thing. There's still parts where the vocals are given precedence, talk of 'adding my shadow to you overspilling urn' and other hyperbolic phrases pushing the poetry angle still, but it's a denser affair and less scratchy, more like a slow burn.

Witness the lumbering Arrowhead as Epilogue which steadily stalks you, unerring from its focused path. These guys are tuned to each other like it's wired in, years of near-constant touring have meant a connection has fused and it sounds very organic as a result.

Difficult, but rewarding if you can persevere it's no As The Roots Undo but something in the delivery says it was never meant to be.