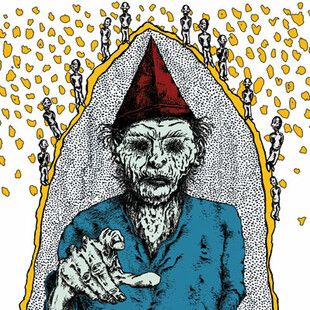 It must be hard for any vaguely thrash influenced 'experimental' bands solely consisting of a bassist and a drummer to not draw comparison to either DFA1979 or Lightning Bolt on a sliding scale of weirdsville vs rock'n'roll capabilities.

Bands like this often have the glib, 'for fans of lightning bolt' spectre looming over them. About ten seconds of a riff in track 5, Bed Bugs... there, comparison over.

Everything else on DEAD's new release, the gloriously entitled Idiots is a gigantic Melb Aussie vista of spectacular post rock/ doom/ thrash/ trash that you should get the fuck down with, get naked and party with. This record is amazing. I'm so glad Idiots exists in my world. Its also incredibly Off Kilter- imagine if Hella or Melt Banana were kidnapped and forced at knife-point to perform Old Man Gloom covers to a gang of speeded up bikers. That is what DEAD sound like. DEAD good.

Idiots begins with an actual fucking 'soundscape' and then gets very heavy into this odd minimal weird headbangy bit. It's all snarling pedalled-out weird vox with this mental driving geetar and big drum kit.

Track two has a bit of a Breeders low-end, lo-fi vibe. There’s this song that sounds like a witchy incantation by Patti Smith. All the songs have really badass names like Couldn't Keep His Mouth Shut and Murder Hollow. In fact, it's all top, I bet they are ace live too.

Its all so effortless and although I don’t want to geek out too much about studio techniques or whatever- this is so awesomely produced, really cool, crystal clear, epic recording. Plus, apparently its all done on first takes and light on the overdubs- a small tear has formed in the corner of my eyeball.

I think I reacted to Idiots in a similar way to when I heard Leicester's now retired Diet Pills for the first time, as both bands have managed to bring something really new and innovative to heavy music whilst still remaining classic.

Idiots is a very "future forward" record and DEAD have clearly come from a place where they aren't trying to be a doomy 70s pastiche or re-create a Fort Thunder sound, it's clear DEAD are just doing their own thing and its crazily good.