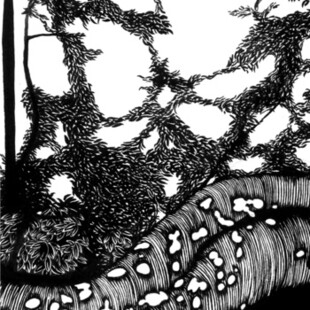 Ian Watson is a solo drone and noise musician who slaps together digital and analogue mediums like it ain't no thing.

Using iPads (blergh, evil) and tapes (woop, retro) he creates a tapestry that somehow manages to sound like that combination. The crackle of clearly rough-shod tape loops clearly ring against the more brash elements brought forth electronically.

There's a rhythm to some of the cadences here that bring to mind the knowing repetition of dance music, but they are like footprints in the snow, repeated so many times over they have lost all semblance, like the infinite impressions of painting with half a potato long after the paint has run dry.

Slivers of loops reveal themselves slowly on tracks like 2 (all the six tracks on this C60 cassette are simply numbered) and remain almost mute. There's voices there too, but like the vague conversations you imagine through a wall or through a thick door, incoherent and distant. This particular track elevates to simply louder volumes and the shimmering sonorous hums you have come to expect from ambient efforts, but it's actually rather calming.

Elsewhere on the release, Watson takes the minute, the incredibly microscopic and examines each second of time with his explorations. The indescribable sound of electricity breathing is at some points, all there is to experience.

There's some xylophone plonking here too, but nothing that threatens or annoys. Very chilled, like being wrapped in a duvet on a snow day.

Originally released on Watson's own Phantomhead label which seems to harbour all his limited tape releases, it's out now on cassette from Armed Within Movement.