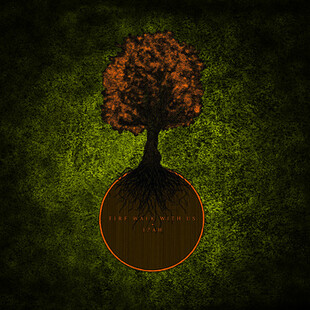 Available on the aptly-named label Rising Magma due to the music’s incendiary nature, this three-track double-header offers up two Netherlands-based bands plying their brand of abrasive yet persuasive metal – Izah’s melting pot of sludge, hardcore and noise, and two helpings of post-metal from Fire Walk With Us.

The entrée are Izah from Tilburg, home to the legendary Roadburn Festival, a not-unachievable future endeavour of theirs (having already supported heavyweights Kylesa, Baroness and Wolves in the Throne Room). The 11-minute battering ram of Antagonized more than lives up to its name, an everything-but-the-kitchen-sink conflation of dynamic layering and balls-out aggression, its brain-teasing build-up and sonic smack-down assaulting the senses like repeated doses of electro-shock therapy.

Vocalist Sierk Entius races out of the traps like a rabid dog chasing after the proverbial rabbit, his Celestial-era Isis vocals flitting effortlessly between guttural growls and dulcet tones also similar to Cave In’s Caleb Scofield, while scattershot, penetrating drums launch multiple aural offensives, and swathes of feedback are thrown into the mix for a hefty uppercut straight to the cerebral cortex.

Produced by members of Textures and Pestilence, the good company they’re keeping in the studio translates well to their raucous output, although with so much happening in their solitary track it can occasionally get crowded and slightly Jack of all trades. With the release of this EP just a week before the end of the world that everyone knew wasn’t really coming (let’s be serious, Mayans!), this involving number could hypothetically have been the ideal track to welcome in the apocalypse.

Going Dutch on the bill are instrumental Amsterdam residents Fire Walk With Us. Their name quite possibly influenced by the Twin Peaks film of a similar name, FWWU open their account with the aspiring Ascent, which boasts punchy, crisp drum production and a fuzzy, meaty guitar tone in their riffs that wouldn’t look out of place on an album by Bossk, Pelican and their ilk, before capping things off with a heavy beatdown that flirts with hardcore.

They then launch into Bygones with a sample from the 1943 film The Song Of Bernadette, a black-and-white spiritual biopic regaling the story of a nun who has troubling visions of the Virgin Mary. Translating this melancholy tone into their output with effervescent drumming, thick layers of guitars and an Etna-worthy bass rumble, what we’re given is a cinematic soundscape in 5.1. After the brutal assault of Izah’s track, this more sombre piece traverses through post-metal territory that throws up a few surprises, especially a stellar drum production reminiscent of the Earthtone9 album, Arc’Tan’Gent.

Although relatively new in town, they’ve already shared the stage with Earth and A Storm of Light, meaning their brand of reflective, introspective eclecticism demands more attention. If seven-minute stratified songs are your bag, naturally.