Lincoln is starting to get some pretty cool live shows.

It's mainly down to Mountains of Records, but this one was pretty special. French band Syntax Error are an exercise in spontaneity and whackiness on record and they didn't disappoint live. 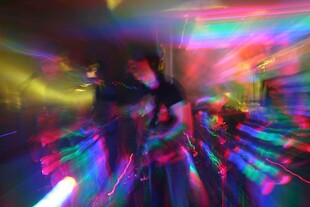 Before the onslaught of bow ties and channel-hopping weirdness came locals (I think) Man Makes Fire. Not taking themselves too seriously, they rammed through a set of inoffensive punk rock via alt-whatever to a load of their mates, making me feel quite the fogie. Middle of the road stuff that I've come to expect from young bands in this city to be fair, but by no means bad, just not tickling my admittedly difficult tastes. 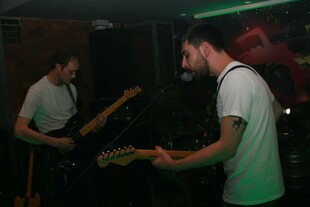 Cheap Jazz are something special, all stretched chords and off-kilter timings make their dual guitar and drums sound all the more interesting. The vocalist explains that it might sound weird as their bassist quit right before the tour. How inconsiderate.

They have a line in excellent song titles, including School is a Gateway Drug and Horse Drawn Nuts but their musical jiggery pokery is a part-Oxes/part-Shellac beast that I'll be tracking down as soon as I can. 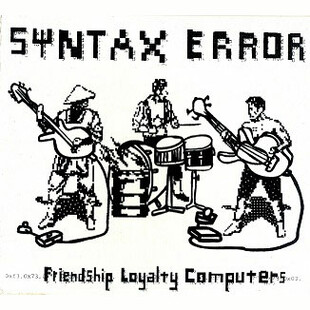 Their touring partners make the stage in matching white shirts and mismatched ties. They look like someone gave the special bus guitars and cheap fizz as they grunt, scream and wrestle with their guitars for a madcap half hour. It's all over in a blur, but their riffs collide in a way I only thought the likes of Beehoover could make happen. Gloriously fun, it's music full of mad angles and distortion. The ultimate party band, if your party has jelly and ice cream.

I had to scarper before locals Bear Makes Ninja came on, so apologies to them. Sadface.