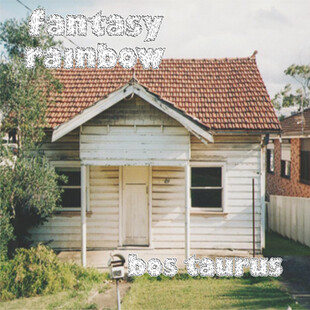 Did I ever tell you my definition of insanity? Doing the same thing over and over again.

More summery throwbacks, way back into the mists, that thing you do, Beatles-esque beats, harmonies. Twisted down the years, but put your finger to the pulse of the music and you can trace a line from the start to the finish. Maybe more a palm-reading or the tracing of veins. Here, and here, to here, this is where a certain brand of alternativism went.

Lyrically Fantasy Rainbow do smart, “Keeping all my old receipts in case they redeem me,” and, “All these new faces are only replacing.” Wry wistful commentariat.

The sound pleases, fuzzy-wuzzy guitars, a charming clatter of drums with additive percussives sprinkled in the cracks to fill to a fullsome yet not fussy sound.

Pop melodies with a will to distorted sounds and a playful approach to song structures. Not your typical verse/chorus/verse here. Similar to recently reviewed Pile, but softer, much so, more music for sunny mornings when in recovery.

Pleasant, pleasing, but again nothing to get my heart racing or truly bring a smile to my face. Maybe I’m just jaded, overdosed on so much music through the years that nothing is new, all shades and echoes. This shade, this echo, is great, lovely. If you life genteel and fuzz-laden indie/alt-rock with a dose of Americana then you will very much enjoy Fantasy Rainbow as a whole and the album Bos Taurus in particular.

Just for me I’m sleepy enough now without more of this. I know this music, let’s change the beat.

Did I ever tell you my definition of insanity? It’s doing the same thing over and over again.

Bos Taurus is a fuzzy album by Fantasy Rainbow. It is inoffensive, competent even. But you’ll have heard it before if you’ve hungered for music like I have over the years. I have certainly heard the same or similar more than enough times to register a deep sense of deja vu.

Put it another way, I’ve listened through the album without really paying attention to it at all. But I do not even feel an unconscious influence pulling at me from within it. No mood-shifting here. No influence at all. Maybe that’s what you want, PH neutral music, but without a little acid or alkaline I find my senses dulled. Like distilled water.

Did you ever drink that? Worse than stale. Squirting it wastefully in science lessons. Listening to a song on my mp3 player with a single bud hidden down the sleeve in boring education. Back when mp3 players were a racy concept and people told me I was dumb for buying one, that minidisc was the future and I was deluded. Well, on a long enough timeline we’re all right at some point. I digress. I’d have listened to something like this at least half the time. But that’s it, I listened to it, and I moved on. I’m done. If you’re still for it you’ll like this. It’s good, if a little flat. Distilled water music, losing the particulates and particulars that might have made it interesting in the first place.

My definition of insanity: Doing the same thing over and over again.

Did I ever tell you my definition of insanity?

Perhaps the problem is with the listener.

Silence. My idea of fun.