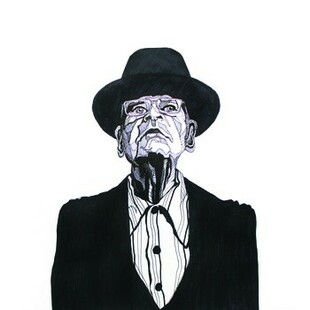 Wonkiness with a Pavement/Sonic Youth vibe. Actually something in the vocals makes me think of Failure, a rare gem of a band. Drawling, lethargic.

Sense of that 90s quasi-grunge progression to the chords. Soundtrack to early mornings when you’re awake before you should be and the sun’s coming in hard through the window, big yellow.

Perhaps too much at times an American ‘alternative’ band wearing their influences on their hearts on their sleeves, still this is welcome stuff. Messy, fuzzy, drawling lyrics twisting up into yelps and shouts, then down into mumbles.

Loud/soft/loud slow/fast/slow, dynamics you’d expect. Grunge-ian gymnastics. Pleasant, though I’d second-guess myself here for how much it might just be nostalgia in effect. Remembering teenage moments, early twenty-something moments waking up from all night essays and other less salubrious adventures, when the fight had gone out and all I could manage was a bit of fuzz-rock and lyrics I let slide over me without their requiring attention.

Lest I retcon, I was always more on the side of study-hangovers, ever bookish, but still whether you’re broken from book-learning or a hard-night’s boozin’ you know that feel, to cop the parlance of the internetworked yoof. That feel is being too tired for real engagement with music. You just want something down in the back fuzzily echoing your deep-fried brain. Pile do well to soundtrack those fragile moments of morning.

This is no monotone piece, even if dripping operates loosely within genre boundaries. The peace alas does not last always, moments picking up pace and volume, heavier sounds pushing my earlier sentiments out. The majority stretch though is pleasant discord, anaesthetic guitars purring like the lost sound of an American summer that passed before I was even into my teens.

I am split down the middle. Part of me luxuriates in this nostalgic sound, but to quote another band’s song, “They were failing dutifully / If you’re going to fail at all.” That’s a misappropriation of sorts, I suppose, but it was speaking about the Grunge movement of the 80s/90s turnover, and here I’d apply it to Pile for their adherence to this sound. Good, lovely even, but overly familiar. I like, but I know of bands I’d rather listen to who did it before. Not that there cannot be innovation in a sound or style, but here there’s nothing to really shake the dust off and join the ranks of past masters.