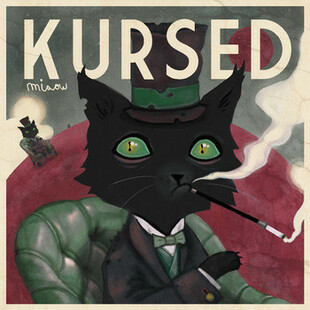 Hmm, this really is a very mixed bag indeed from our friends across the Channel.

Kursed are a young indie rock trio from Montpellier, whose style is very much likened to The Arctic Monkeys, amongst others. So much so, that the listener would happily mistake the opening riff of Tsa, tsa, tsu as coming from the repertoire of the Sheffield band.

Personally I think they've been listening to a lot of Placebo and The Presidents of The United States of America, as their music combines many elements of these two bands, particularly the vocal style of Hugo.

And to me this is a bit of a let-down, as it sounds too similar to many other bands so they wouldn't stand out in a very crowded market. It’s almost like they are a few years behind the times, as the music world has moved on from the likes of The Arctic Monkeys and evolved elsewhere.

But, saying that, there is no denying that these three do form a very tight knit unit, that deliver a collection of very good songs, that are well written and would go down well with a certain crowd. The songs are short and snappy and deliver some euphoric moments of mid 00's indie pop rock. These would have fitted in very well at the summer festivals of Leeds and Reading as a warm up for the big hitters of the genre.

Tarantino has nice gentle build up to it and then a brilliantly delivered guitar lead that does make for an enthralling song but sadly for me, these highlights are few and far between. I Feel You is a song that brings about a change of tempo and direction, but is still a bit of a boring, bland sort of song. Whether singing it in their native tongue would enhance the experience is another question for another time. And every time I listen to Modern Politician I am still convinced that this is their attempt to pay homage to PUSA!