Boduf Songs Burnt Up On Re-Entry 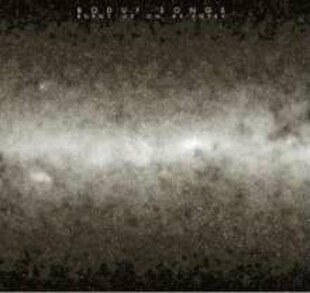 The album title is no misnomer. The start is a static hiss that sounds like something re-entering the atmosphere. Then a break, and a guitar, and a voice.

Raspy, that half-spoken style, right up in your ear. Weird glitch noises in the back, a drum machine, guitars synchronising. Then another break, into a metallic crunch, a momentary burst, leaving a layer of noise in its wake. It comes back though, and there’s definitely some catchy melody there, under the crunch. I like it.

This is certainly a surprise. I love surprises. This is the first track and already I have been pleasantly surprised, had my expectations well and truly messed with whilst the song retains coherence.

Second track starts with beautiful chiming. Something akin to the recorded pulses of stars translated to sound rises up. More drum machine. It all speaks to the work of one man, someone with a singular vision. It works, there’s craft here.

Lyrics occasionally dip into cliché, and perhaps don’t quite gel with the sonic palette on display, but Boduf Songs, aka. Mat Sweet, has a plan and sees it through. Verging perhaps a little too close to the goffick, almost Bauhaus or hints of Nine Inch Nails to some of the sounds and the singing, but with the weird ability to subvert and create some really interesting sounds and textures there is plenty of forgiveness in me for these lapses.

There’s drones, double-tracked vocals, guitars and feedback and synths and noises from beyond the wub, drums ticking, machines squelching digital wails. Burnt Up... rests on a bed of sonic experimentation, yet brings songs, actual melodies, hooks that get into your gut and pull you along. It is an intimate experience, fortunate and blessed for its absence of artistic or technical navel-gazing. It does not lose itself, and as I write this in the late night by the glow of my monitor it is a welcome companion, a strange bedfellow of brooding intensity mixed up with hidden pop caches.

A highlight, Everyone Will Let You Down In The End, starts off brooding and understated, but then it brings in a great lead guitar line, crashing drums and a crunching droning rhythm guitar. All of this cribs again from Trent Reznor and similar soundsmiths but gets away with it, does epic and understated all at once, and manages to pull out of the gravity of its influences. Beyond this mid-album soar I press you to hear the track that follows it, Long Divider, a thing of cycling noise, drum machine and a beautiful electric piano sound. There’s more to it, but it serves to show the diverse cogency of this album, how it spans a range of moods yet never strays too far to lose focus.

Again, this is a surprise. You can plunder the depths of musicland, you can be sent buckets of bits, endless hours of sound can pass over your ears, but the rare find, that moment of impact and immediacy, is a delight to be treasured. Boduf Songs did not burn up on re-entry, rather this album came out of the sky and hit me deep in the brain, and has lodged itself there, a dark and catchy interloper.

Forums - Reviews and Articles - Boduf Songs - Burnt Up On Re-Entry