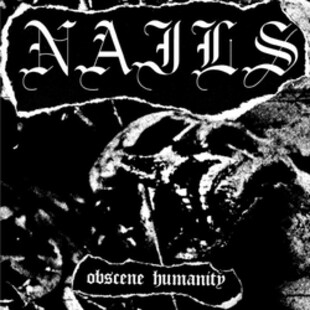 There comes a point when hate becomes self destruction and from the very beginning, I've felt this of the abrasive nature of Nails.

This latest 7" is a re-recording of previously released tracks with more low end and serves only to drive home the fact that Nails are perhaps one of the most unpleasant and splintering bands out there at the moment.

There's practically no joy to be found, even in a perverse sense. There used to be a wrestler called Nails in the WWF in the 90s. His character was a convict, complete with orange overalls and a murderous stare and the music of his namesake is similarly of one dimension. The bass is a scraping, fat and rusty sound and the guitars sound compressed to hell, all with some industrial-sized drumming and raw, menacing vocals to go with it.

Fine for a 7" but the LPs must grate after a while, I imagine live, they are just horrible to witness. I find myself not hating this, but rather just in awe of how grating you can make metallic hardcore. Sometimes you need a dose of hatred, but when its this overpowering, you might well end up in a ball on the floor, crying for mummy.