Gurt You Ain't From Around These Parts? 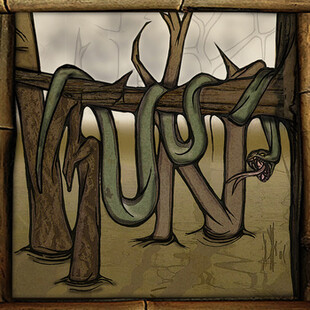 There's not an awful lot to write about when it comes to Gurt's very slender new EP 'You Aint From Around These Parts'.

The intro sounds like some kind of Enochian incantation, until it dawns it's actually an instruction tape for American actors on how to affect a "Briddish acc-ent"- thats good! not enough bands using samples nowadays.

When it arrives, The actual music is as very easily described as doom- sludgy, swampy, heavy blues- could almost describe it as 'true doom' p'raps?

So the title track is very chugga chugga, after that a quiet/loud/quiet/loud one, so in total this is two songs and an intro.

But Gurt, we wanted more! you promised us an epic swampy soundscape and it's over before it truly begins.

I understand this band has been through a lot of upheaval, so as a second incarnation, its good that they have bounced back and quickly hammered out a new release. Just a shame its so incredibly brief- would like to hear a longer more cohesive record next time, with an appropriate amount of ceremony, its a 7" single and a B-side, there's nothing 'extended' about it.

The cover art is cool though.

Forums - Reviews and Articles - Gurt - You Ain't From Around These Parts?