Sky Burial There I Saw The Grey Wolf Gaping 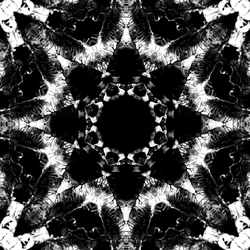 Sky Burial is one guy, Michael Page and after six years this is his ninth release.

Largely ambient works, there's a dark edge to all the tracks here, joining up the kind of sprawling basement tape genres with the digital end of the spectrum it manages to have several layers. But rather than annoy or antagonise, this music sits on the periphery, only drawing you in with elements of interest now and again. This album features artists you'll probably know including Jarboe (Swans), Danny Hyde (Coil) and Bridget Wishart of Hawkwind and several you probably won't, Anni Hogan (Marc and The Mambas/Willing Sinners), Jóhann Eiriksson (Gjöll, Reptilicus) and several more.

This is the first Sky Burial album to feature vocals or vocal refrains but really the music does all the talking. On Shedding The Husk an insistent yet calming digital seething sound sets off around the halfway mark, sounding like nothing you've ever heard before. Instead of one level of feedback, there's several scrambled layers at work all at the same time, colliding and whirling to create a sound that draws you in.

Elsewhere we have the fantastic Carne(val) which sounds like a 8-bit trance set in a digital fairground. The kind of cacophony you get in a games arcade this is not, it's more like a more active and alive Boards of Canada track, full of repressed energy.

Bridget Wishart's turn on Beyond The Veldt is beautiful, with sonic vagaries dropped elegantly over a more restrained and ethereal track of ambience than other pieces on the album, it's a satisfying diversion.

Fools Circel 9ways looks like a glitch message and plays much the same, phone-like loops and Jew's harp gone awry clashes with vocals that shift about giving it an unhinged quality and I wouldn't be surprised if this is the track that features the Coil chap as it has that same uncomfortable edge to it as they used to manage on stuff like Amethyst Deceiver.

The title track that closes proceedings has what I presume is a sample of a wolf (but turns out to be Jarboe howling), manipulated into a snarling, slowed down mess that makes it seem all the more terrifying a beast. Bagpipes add to this and create an unnerving bed for static waves to crack against. Industrial brakes and engines squeal over this already hellish sound and the effect is a panic-attacked inducing racket. It all slowly dies, fading out to a rumble.

Deep and impossibly unforgiving, this is an album to immerse yourself in. Probably best suited to the daylight hours of the winter rather than the darkness, it's somewhat of a masterpiece.