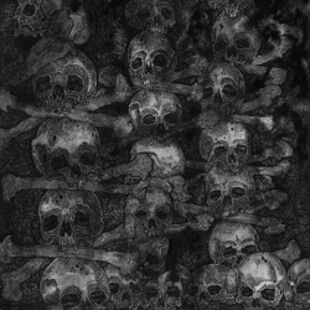 The Secret have been going for ages, since 2003 in fact, but this is the first time I've given them a proper listen.

All the plaudits are apparently deserved, this is a slab of heaviness that simply refuses to give up. So much so that at times you pray for a bit of variety. It's not that their Converge via black metal and sheer wall of sound shtick doesn't hit the spot, it's just that's all there appears to be, no dynamics means that unless you are after a sky filled with black clouds, the screams of the damned and machine gun blasts then this might not be for you.

The black metal element is certainly part of The Secret's charm, the hanging chords that signal the start of Heretic Temple burn with a kind of malevolent hum that gives way to the screeches of feedback and screams towards the end too. It's a grim, smoke-filled sound that will appeal to both fans of blast-like hardcore like Converge or Rise and Fall or equally those who dig their frosty, wind-damaged black metal.

The vocals are processed in a way that gives them that 'delivered through a loud hailer' sound favoured by an increasing amount of vocalists and it starts to become very repetitive about haflway through Agnus Dei and you start to wonder if their sound is simply too derivative to hold much water.

It's an album of counterbalances for sure, if you want the cerebral and thinking man's metal sound, steer clear, but if you want the cold, calculated sound of a band creating a wasps' nest of noise and anguish then this is for you. Interesting and one I'll probably return to in time.