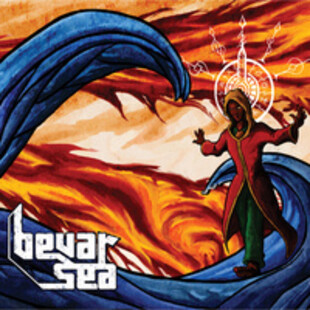 Bevar Sea are a stoner/doom band from Bangalore, India and are somewhat of a revelation.

Sounding for all the world like Sleep and Grand Magus upped sticks and took up residence in the east, it's heavy, confident stuff. There's a stomp to their music that's just wholly impressive as soon as they fire up the engines on opener The Smiler and it just keeps getting better. As it rolls on, it has a lot in common with the debut album by The Sword, lots of fat riffs, fantastical lyrics and all delivered as if from another era. If you happened across this band as support to someone, you'd think they were already established and they'd just passed you by.

Lyrics like ...A silent flick of a serpent’s tongue/Shut the light, here’s the opium lung/The pale blue haze of a beetle’s eye/Turn on the night with a phat smile just say it all. They could have been lifted from the raga-esque Jerusalem by Sleep, but Bevar Sea have their own agenda and all their pomp backs up such drug-addled lyrical frippery well.

The volume at which Bevar Sea play is testament to their overall attitude. It's unrelentingly heavy. They seem to have been raised on a diet of Sabbath, Candlemass and Cathedral albums. Indeeed frontman Ganesh Krishnaswamy seems to be channeling Lee Dorrian at times, that snarl and cod-theatrical voice he used on heavier stuff like Endtyme in particular. To be fair, he out-Dorrians Dorrian with lyrics like this: "The old monk on the run, he scrams/Violent rhythm, a dead romance/Smoking Hookahs, paint the sky/Nocturnal assassins in a trance" which border on the ridiculous, but hey Cathedral have called it a day, so there's room for Bevar Sea to take on the overly-camp doom mantle as their own.

If you can't tell already this is worth hearing, it's a great insight into how the doom sound has gained a worldwide audience and the Indian take on it is as beguiling as you'd expect. It helps they've not gone down the miserable doom-trodden path, rather the fun and righteous side of the genre, producing stuff you want to pump your fist in the air to.

Take a listen here, but be advised they have loads of stuff for sale, so support what is surely a fledgling genre in their country.