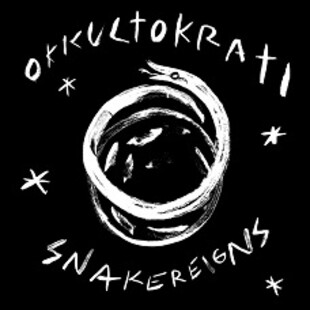 I first happened upon Norwegians Okkultokrati as an unknown support to Kylesa in February last year. Bold and heavy, they caught our attention with Darkthrone vocals over doom and hardcore grime. It took me a while to follow that interest up, but when I did, with the purchase of the early EP Ingen Veit Alt, I developed an instant crush. Only 5 songs long, most of which not bothering to hit the 2 minute mark, it is a beguilling mix of punk attitude allied to heavier musical output. Witch House and Upon the Anvil were riff heavy, breathlessly brilliant tracks that still get regular plays on my iPod.

Grouped in with Black Breath a few times when I've read about them, they do have that crossover hardcore-crust-Entombed feel, but less brutal facial assault, more doom punk. No Ouroboros, the opening offering on Snakereigns, is a great example, a fantastic mess of Dukes of Nothing throttle aided by venom soaked vocals creating a sordid doomy atmosphere.

It never really takes off after that though. There's nothing bad here, but then nothing grabs you by the throat, the ears or gets the head involuntarily nodding. If anything it's harsher sounding than previous efforts - the vocals more consistently on the black metal periphery, the riffs more doom than hardcore. Acid Eagle One is at times reminiscent of Southern Lord output, slow and misanthropic, while We So Heavy is similarly lumbering and dark, all seven and a half minutes of it.

Snakereigns is still an intriguing listen, better than many of it's peers due to it's melting pot of styles, but like their debut full length album, No Light For Mass, it never reaches out and grabs you like Ingen Veit Alt managed so thrillingly. Possibly I've built them up in my own mind too much, hoping for something they never were, and therefore measuring Snakereigns against a false yardstick. They're still a band I'll champion, as for all the obvious influences there's a unique and exciting aura around Okkultokrati; they just haven't delivered on their initial promise. Yet.