The Obsessed Live in Koln 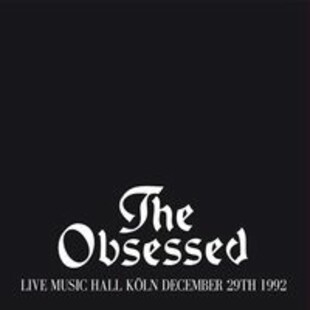 Illicit longevity is one thing that fans and newcomers alike have to deal with, when does a band cease to exist?

When they’ve broken up or when they reform and break up?

The term ‘fat riff’ has never before been too fitting to this bunch of what was a super-group before its time. The Obsessed spawned key figures in the early 1990’s, Scott Reeder being one of them. The band eventually ended up forming the back bone-grunt on Goatsnake’s releases.

The opener on the latest live album, pressed on delicious red vinyl for all you fickle folk that buy things primarily on the fact it has a colour that isn’t black. The opener is a violent stab in the wall of sludge that most listeners are waiting for. St. Vitus connections are also in abundance where track one is concerned.

Following on from the gateway track, the next riff is what would make a Pelican drool, this type of atmospheric guitar and badass riffery mixing in together like a whiskey and ice. Vocals are sounding mountainous in this stormer of a track, probably worth buying this on this song alone.

Skybone is up next, savage bass playing kicks off in this one, closely hunted by the riff that again will keep you nodding or feeling like a boss in your car driving to work or sat on your arse at home with a beer.

Effects utilised by the guitar blend in and out seamlessly, the whole concept of an effect is that it needs seldom use, too much effects can lead to hilariously lame recordings and live shows. The Obsessed know that this is key to keep it thundering along like a 1,000 bulldozers falling down a canyon.

I often wonder how long it will be until everyone has done all the riffs, how many more can there be? Tastes will change and always want riffs played with different beats, it’s not about the riffs with The Obsessed, It’s, about the perfectly mixed combination of the drums and the vocals that make this band everything you like in stoner.

Putting pedal to metal for the next track the band shift up a gear and drop down following a machine gun style onslaught, this type of band has something hidden away. It’s impossible to put your finger on it, guitars, bass, drums and vocals give you a sound that is tried and tested. Structures of individual tracks are where this band; create more of their everlasting mark.

Released on Outer Battery records and with limited copies to be pressed; you’ll be fighting a losing battle to try and get one at the right price for long. The Obsessed have got themselves a pretty strong fan base of dudes that were there the first time round and need to make additions to their vinyl shelf.

The whole live album debate is where a lot of fans are shallowly dislike some of their heroes just for one badly recorded record that they have at home, The Obsessed have cast off any stigma that may have been linked to them playing live and recording it. There’s no overdubs here, there’s very little that could be identified as a mistake in all musicians concerned.

I mean, if this is what The Obsessed sound like live, we should all be watching and learning from these masters. There’s enough going on here for everyone and his dogs to enjoy...

If you didn’t go to this gig, you need to listen to this.

Forums - Reviews and Articles - The Obsessed - Live in Koln