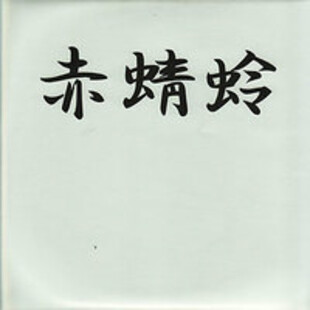 First released on Hand-Held Recordings, coming all the way from Hiroshima, Japan. Akatombo immediately confounds with a hand-numbered release in an envelope big enough for a 7” but containing two CDs.

Delightful packaging though, something special with prints and cuttings of mugshots of what I assume are Japanese politicians inserted with the discs.

So, what are we listening to here? Well, the first track is an atmospheric minimalist thing along an electronic line. I am tempted to make vague comparisons to early David Holmes.

As the album progresses there’s a murkiness to the sounds, carving cityscapes out of drum loops, samples and synthetic wails and squelches. If anything, being a devout fan of William Gibson and his seminar cyberpunk novel Neuromancer, I’d say Akatombo is the kind of soundtrack you’d hear in the cinematic vision of Night City, Chiba from the opening of that novel. With the distorted noises and insistent beats you can see someone walking past bars and arcades with noise leaking out of every one.

But, if I may be critical, that make be the weak point here. There’s something heraldic about this sound. It sounds like an eighties vision of the future, sounds like some of the more aged parts of Neuromancer and that whole cyberpunk thing that happened back then. Perhaps it slips into the nineties at a push, but it recalls the electronic music of those two decades.

Between beat-oriented tracks there is some overdriven synth drone, some welcome ambient noise. Track four, Cypher, brings long sweeping drones, submerged samples of voices echoing up from somewhere deep, and makes me think of sunrise reflected off the skyline of a tall city.

Some of the beats throughout the album must be sampled breaks. I cannot speak with any authority or accuracy, but sometimes they sound like breaks off other artists. I’m thinking Alec Empire’s Low On Ice, Future Sound Of London’s general output, things like that. Some of the occasional guitar work very much harkens back to FSOL, similar cityscapes drawn in electronica, reminders of ISDN and Dead Cities.

I like it. It’s suitably cinematic, or at least imagery-inducing. Something to have low in the background of a late night when writing, making, thinking, gaming. Stand-out tracks are the drone of Cypher and the very next track, SSRI. I like the package, that this is definitely a thing and a set of sounds. There’s nothing ground-breaking here, but I do appreciate music I can absorb unconsciously whilst I go about other things.

That’s just one disc though. What lies on the other? DVD! Akatombo turns out to be an audio/visual artist. As luck would have it two of the three videos included are for Cypher and SSRI, the stand-out tracks. Cypher is a melange of images, a ferry in fog, lots of footage of people in heavy snow in what I assume is Hiroshima or Tokyo. Rain, cranes in the distance. More ships in the heavy snow. The images link up with the sound, drifting drones animating with the silently weather.

SSRI is solarised, stencilled and semi-psychedelic streets and people, cars and trains moving by. Images you’d expect, that cityscape I heard when listening to the album unaccompanied. Again, not new, but not bad. Not something I’d feel the need to watch though, something you might see projected in some suitable space for such things. The music conjures well on its own, and that’s more than enough for me. Occasionally dated, but offbeat enough. Worth a listen.