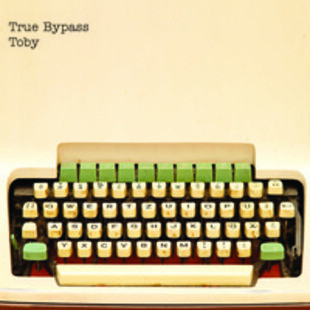 True Bypass is what some guitarists perceive as the most desirable way to circumvent the effects part of an effects pedal.

Boss pedals don’t have true bypass typically, so some view them as inferior and with enough chained fear they may cause latency in the signal to the amp, resulting in your playing being out of time. A true bypass is basically a switch that completely cuts out the effects circuit, providing a direct and efficient line to minimize latency. Infodump over.

Anyway, True Bypass the band are a complete bypass of any effects, being an acoustic guitar duo, Chantal Acda and Craig Ward respectively. I was particularly interested in this release as Craig Ward is a former member of dEUS, a favoured band of mine.

At first, I must confess, I was disappointed by the album, Toby. Acoustic guitars, some unidentifiable percussion like a toy-xylophone in the back of starting track, You knew.

But it grows, for what is an acoustic guitar album with a few scatterings of samples and other instrumentation bookending or hidden beneath. The album art, bar the typewriter on the front, is all crayon drawings either by children or aping a child’s style. Simple, and the music is pretty much the same, plain guitar lines repeated whilst Ms Acda sings the majority of the lyrics, Mr Ward occasionally providing backing and harmonies.

More interestingly, from the liner notes, and explaining the album title, all lyrics were written by Toby Litt. Investigation leads me to find Mr Litt is an Englishman, a lecturer, a writer, who wrote all the lyrics prior to any music arrangement. Not that this is something that hasn’t been done before, but it is fun to trace the genesis of this music, finding its start in lyrics instead of music, and for those lyrics to come from someone external to the band.

Pleasingly, the lyrics are all in the album notes. Less so, there’s not much here for the lyrical trainspotter. Despite these words being written by a lecturer and writer they are rather basic. Lots of simplistic rhyming schemes, a preoccupation with the eternal musical topic of relationships. There’s definitely nuance there, under the simplicity. The relationships, the endings and beginnings and confessions contained within the lines, are not easily addressed. Perhaps that’s a positive, the message complex despite the open-handed language.

But lyrics are only a small part of music, and for all I could proclaim this a piece of subtle genius, the musical accompaniment is not really distinguishable from any other acoustic album. It’s good, but it is not great, neither a new invention nor an innovation. If you like relaxed acoustic music with lyrical barbs then you may like this, but it won’t stand out against its peers.