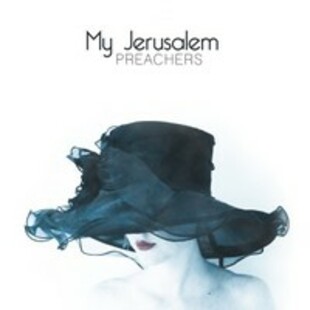 Coming on like Murder Ballads-era Nick Cave and The Bad Seeds, these baritone vocals and piano hits of the eponymous first track are immediately relevant to my interests. Catchy pop bleakness.

Track two, Shatter Together, is a slinky thing, vocals like ink running on a page, a certain lugubrious swagger to the rhythm and the vocals. Perhaps occasionally easy to anticipate, but done with panache, played well.

In fact the arrangements are rather sparse, pleasingly so. An economy of sound so nothing outstays its welcome. The tension present here is especially pleasing, a sort of contained energy.

The third track slides into an unfortunate bit of trad-rock with yelping vocals that do not delight as much as the dark baritone of the first two tracks. If this is the energy previously hinted at it should have remained so.

Alas, the slide runs deeper. For the initial starkness of the first two tracks to be so pleasing it is downright peculiar when Mono steps in as a genteel quasi-ballad after the trad-rock of Born In The Belly. Whilst the notion of variety is welcome the tonal shift jars the ear.

And then... I become completely non-plussed. We slip into some folksy hand-clapper, trumpets blaring in the back, backing vocals and I wonder if this is even the same band. Competent, great vocals that sound like they’ve matured in whiskey for a good few years. Now, however, we’re about as far away from the dark start as one could be. Great range, but perhaps better reserved for an evolution through several albums than a scattershot sprint through multiple sounds that mean the album never really finds a groove.

Devoe, listed as the start of “Side B”, returns to something akin to the first two tracks but never quite in the same vein. Whilst there’s talent here it props itself up on increasingly simple hooks. The vocals on the chorus get dangerously close to rock clichés in content and delivery.

It’s a weird, patchy album. Take Between Space, track eight, a pensive grower, followed immediately by Oh Little Sister with it’s summery horns and cheery driving-in-a-soft-top-with-the-roof-down melody. They sound like they were recorded on different planets.

Each song stands well on its own, but in the wider context of the album as a whole nothing really sticks, there lacks a central line you can run your finger down to define any real consistency. There’s some schism between a desire to sing hymns to a pantheon of Nick Cave and similarly dark classic singer-songwriters, and then a need to write radio-friendly unit-shifters that tend to fall flat as a result of trying too hard to shave off all the sharp edges.

Good, but inconsistent. My Jerusalem should pick a path and follow it all the way along on their next album, and if it is wrong then there’s always another album to take another path with. Walking the first five steps down eleven different paths won’t get you anywhere.