Mark Wynn "James Dean makes me insecure, why does he have to be so shexy" the album 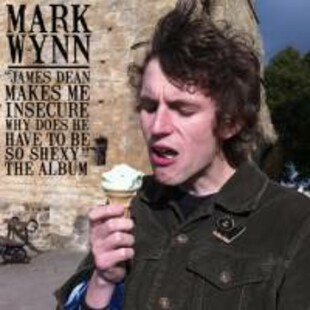 A bloke with a guitar who sings about anything it seems, nice.

Mr Wynne (I presume the chap with the ice cream) sounds like a young John Cooper Clarke, but less angry and more Half Man Half Biscuit in his world view. Just lyrics bumbling around about his life, which includes bus routes, new shoes, love for Henry Miller and Sainsbury's.

He sounds both fed up and whistful throughout. There's romance in there, but also stuff about disappointing nights out. It's very clever, very quick-witted and he tails off lines as if it's all improvised. I think it's also recorded in an ad-hoc way too, the guitar sounds like it was recorded in one room while he mused away in the other, he also adds descriptions to tracks here and there.

It's rough and ready, but in the lo-fi battered tape-style recording there's a charm and an honesty that will make you sit up and listen. i imagine he silences audiences who probably sit there dribbling into pints as he chatters away over his beaten-up geet.

He's actually on a headline tour throughout November, so go and see him for yourself, look up where he's playing and listen to the album here.

This is top, totally self-absorbed but who cares? Beats listening to Kanye West harp on about how much he loves himself, surely?

Forums - Reviews and Articles - Mark Wynn - "James Dean makes me insecure, why does he have to be so shexy" the album