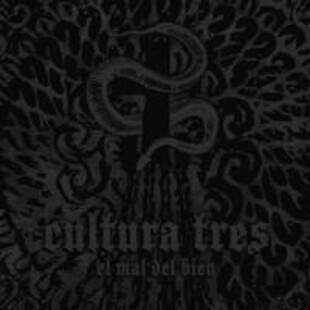 Only in recent times has the average heavy music fan’s tastes ventured outside of the US and Europe. With the exception of the relative mainstream success of Sepultura, South American metal remains an unknown quantity. If Venezuela’s Cultura Tres are an example of the local scene then perhaps we should all be a bit more open minded.

Their album El Mal De Bien displays a variety and level of musicianship that takes it well outside the sludge/doom genre. Every track without exception offers up something that surprises and repays close listening.

The experimentation begins with the vocalist, who sings in two languages and about half a dozen styles. The opening track is very much in the grunge mold, but over the course of the album he adopts a punkish hardcore delivery, a death metal growl as well as a more contemporary heavy metal approach.

The musicianship/song structures are also experimental. Whilst starting within the traditional sludge/doom framework they quickly use a variety of tempos and influences to escape the genre’s constraints. Occasionally grunge like as on Propiedad de dios (which reminded me of the last Alice in Chains album) through to hints of distortion and psychedelia on No es mi verdad - no song sounds the same.

By no means am I suggesting that the album is merely a derivative patchwork of their influences. As is often the case with very talented musicians they combine all of these genres/sounds to make a consistent, compelling whole which doesn’t quite remind you of anyone else. Their South American heritage also comes through particularly on The Grace with their use of tribal drums. Although again the song metamorphises into something that reminds me of German Thrash of the 80s and 90s like Kreator.

There’s some great guitar work in terms of creating texture. The discordant riffing on El Mal de Bien is a particularly effective example. There are also a number of ‘classic’ metal solos that make you want to pick up your (air) guitar to try and emulate.

Whilst there’s no end of variety on the album there are two things that seem to be ever present. Firstly, they specialise in creating songs that seem to build and end up in a different place to where they started. The other noticeable quality is that the standard never dips. If you like sludge but tire of hearing bands that imitate all that has gone before, then get hold of this.