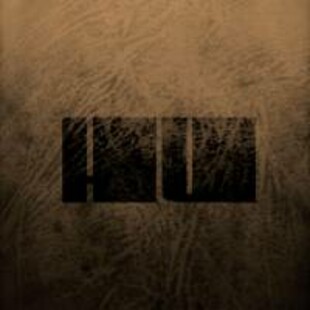 For starters, I really like the idea of 'alternative post metal' it just sounds so far removed from fucking Stryper as one can imagine metal to be.

I suppose "post rock's" intention was to strip down rock music as a 20th century cultural artifact and build it back up, I think that the tape release from 'stoner musclemen' or summat 'HU' does this for metal- in a less wanky, more metal way of course. The 'alternative' part probably refers to how unique they are. They are a bass/vox and drums duo from Portugal too! Wild. Their previous bands also sound fucking fantastic- Lesbian Rainbows or Holocausto Canibal anyone?

It sounds like it was recorded in a vast underground cavern with Neanderthals smearing blood on the cave walls in the background. The album art looks like its bound in human skin, song titles kinda sound like fictional characters names. The vocals are echoey and there’s this persistent low end rumble in the background during the whole thing- it is just curious and actually quite addictive.

The drums are a bit weirdly produced at the beginning of Peter Bee but it gets good and stays good very quickly- the heavier or more thrash influenced of the two tracks online. Rose Mary Carry Cause sounds like someone put White Pony through the wash on a 600 cycle.

The fact I’ve been listening to them on repeat the whole time I have been typing up this review is pretty telling, this is a compelling, odd listen and if you like booming heavy music that descends into animal noises- listen to HU (here).