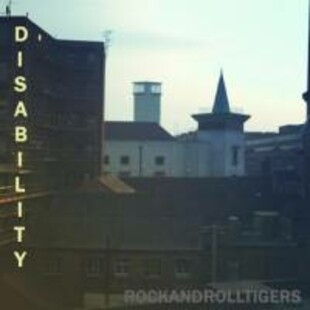 From the ashes of Diet Pills (who were burned down) come Disability.

Their only disability seems to be they ROCK TOO HARD, but nah seriously this is probably the best thing I've been sent this year, and it's October now (autumn in the air, the smell of black metal etc). It's in the same AmRep style as Diet Pills were but somehow more compact and with square edges. Shrunken to a three-piece and with all three members contributing vocals it's a mathy, yet slopsome sound they have bubbling under their skin like pus they are pushing around.

The lyrics are fantastic, veering between unhinged rocking back and forth stuff and urban decay moaning 'Every good boy deserves a clock' is repeated over an over on Under (over and under?). Elsewhere, there's talk of municipal waste schemes (Thought to recycle, but no inspiration and the weird things we do in our own heads, like keep time to music with our jaws (The teeth on the left hand side of his mouth act as the bass drum and the right do the snare). It's all delivered with a brutal, maniacal grin, there's tightened sections which occasionally give way to waves of placating calm, but it's all disjointed, disconcertingly so, but in a good way.

I've listened to this constantly for the last few days, both sober and hung the hell over and it reverberates your bones in a pleasing manner either way. So for the abstinent or the heavy drinkers, it's a universal record/sound/catharsis method.

One thing that's bothering me though, what do the members of Disability say to their parents/grandparents/workmates when asked what they play? Anything but 'I shouldn't say' is lying, so I'm guessing Disability are liars, go and bother them here.