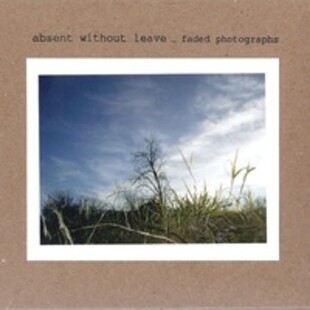 Absent Without Leave hails from Athens, Greece. Expecting spectral noise haunting out of the economic torpor the country finds itself in.

What I find is a lot of guitar picking over programmed drums, wailing electric shimmers in the background. Various other instrumentation accompanies the guitar roots, a rather scattershot selection between tracks. Here a piano, there a blitter of digital synthesis, some xylophone, other less identifiable sounds.

It’s all variations of configuration on something you’ve heard before though, if you’ve ever heard any post-rock with electronic elements. Think Mogwai’s Stop Coming To My House, but without the bite and the soaring release. Other tracks here, with glances to vague breakbeats, make me think of Christian Kleine or whoever is doing the rounds this week on Soma.fm.

The eternal problem of similarity. If you were to hear this would you accuse other artists of cloning? Perhaps. But there are sources, those who started a sound, and there are innovators who progress the sound in some way, sculpt it and add nuance. This is essential when dealing with the amorphous area of post-rock, electronica, ambient and all those semi-engaged listening experiences.

AWOL is a competent artist, certainly with an ear for melodies and pleasing sounds, but is that enough? I am inclined to argue not. There are no surprises here, and surprise surpasses competence.

If you’re looking for some semi-engaging music, this is fine. In fact I’ve run the whole album through several times without really noticing. It works in the background, and did so as I indulged my nerd tendencies and played FTL, deep in space the sounds were serviceable as the backdrop to my crew’s plight as we made flight from an overwhelming force.

Faded Photographs is good, functional. If that’s enough for you, that’s fine. I cannot really fault anything here bar a lack of ambition to transcend the genres being operated within. I already have a lot of music in my collection like this, and it would find a place anonymously in my shelf or my folder full of mp3s.

The release is available for seven euros or more digitally on bandcamp, and there’s three of five hundred physical copies going for twelve euros too. So despite my personal reservations, it seems AWOL is doing fairly well. Standout track is the pensive Dreams And Hopes, containing plaintive violin and glockenspiel.

Invest at bandcamp and give one Greek artist a respite from his country’s financial uncertainty.