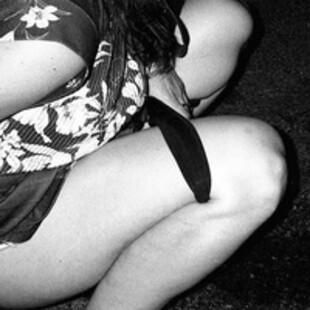 Remember Castor Troy? Remember mrkaxn? Then forget them, 3 of them are back (with another chap) playing, of all things garage rock.

Hailing from Coventry in the same way The Undertaker hails from Death Valley, Love Hurts are of a shimmy-shaking disposition and I expect their gigs are going to be fun as hell.

Brief (of course) this demo gives you a brief glimpse into what the band are about, which is juddering, jangling rock and roll which is best compared to good-time punk-tinged stuff like New Bomb Turks or perhaps The Detroit Cobras.

We're talking short, sharp and to the point, complete with silly lyrics (perhaps injokes) like Don't eat yellow snow, it's not Clover all delivered by previously screaming Mark Finnie in a distorted mumble that suits the sleazy and cigar-chewing rawk on offer.

I'm expecting them to come on one by one and play a funky jam sort of deal before they start properly playing, with each member being introduced and a glitter cannon at the end of the set, but they'll probably come on, play and bugger off.

Go and listen now, it's on Bandcamp now.