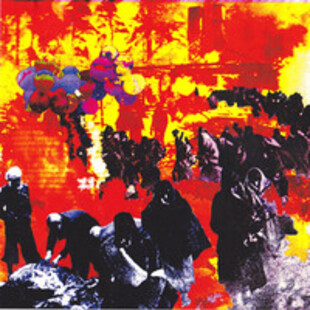 'You wake up late for school, man you don't want to go' starts the old Beastie Boys' number, but oh no, you've woken up in Arvo Zylo's world.

'You ask your mom please, but she... melts off your face with a shoulder-mounted laser'... This is seriously digital mess for sadists. At no point does anything make sense, but then again I don't think Mr Zylo is interested in that anyway. It's circuit-bent, migraine-inducing vomit of the most inane and dribbling kind. Make it through the whole thing in one go and you've either left the room so it sounds like a distant futuristic war or you're probably gibbering while laid in the prone position on the floor and possibly crying too.

This Chicago-based loon has also recently composed a piece of music featuring only ambulance sirens, so you can get a gist of the kind of noise we are dealing with here. From the crackle of static to the full-on skull-shaking bells and alarm sounds sampled and mangled, it's a bewildering release. I'm an advocate of noise, it can prove to be one of the most inventive genres but this is on another level entirely. When artists like Merzbow crack their swirling, feedback-drenched whip, at least you can perceive something tanglible in the chaos, what 333 does in droves is cast hooks that never attach and as a result it's like being lost in some sort of audio hell. This is music from a mind that has immersed itself within the noise genre, knowing each and every new release and soaking up every influence going. However the circuit-bending is rife, so I'd guess he is a keen manipulator of found objects, thrift store keyboards, speak and spells and anything with an electronic voice is game for mutation.

Look into this if you dare, but be aware it will probably fray your nerves somewhat, I'm not even joking, I had to digest it over the course of about a month, listening to as much as I could stand at one time, and I like this kind of stuff.