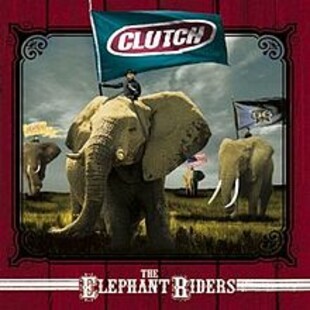 Number five in our series of snarky look backs at classic albums that our erstwhile reviewer Gareth hasn't given the time of day to previously...

PLEASE NOTE: We know the album was released AGES ago, it is not a review, rather an angry look back or longing gaze, depending on how we feel that day, feel free to discuss the album below, we welcome your comments...

Feed Mike enough beer and he'll happily sing most of the Clutch back catalogue at you, whether you want him to or not (As witnessed very recently, sorry.. Ed).

I've also seen them live around the time of Robot Hive/Exodus at the suggestion of some of the original 9Hz crew so I'm not unfamiliar with the band, I just haven't given their albums any play time. The reason for this is possibly that I don't like the idea of them; if you've read the article on Down's Nola you'll know my tolerance for bands who insist on highlighting the area where they live is low, and like Down, Clutch are unashamedly Southern rawk in musical style and lyrics. Irrational? Possibly, but anyone who rolls their eyes every time the Red Hot Chili Peppers release a song mentioning California (112 and counting) feels the same effect to some degree.

This means Clutch are starting on the back foot. Add this to the fact that the mention of "blues rock" immediately brings to mind bands of white, middle aged software analysts in stonewashed jeans playing 45 minute sets of identical sounding three-chord standards, or even worse, post 1980's Eric Clapton (also known as "Slow Hand", possibly because he's been making music since 1963 and seems to only know one scale). So do Clutch manage to sidestep the obvious cliches inherent to the genre? Frankly, no.

But it doesn't matter.

Let's backtrack a little; for the newcomer, Clutch mostly play blues scale based, heavily syncopated rock. Lyrically, there's a lot of singing about Southern staples such as food, music, beer, trucks and a lot of other things that should by all rights leave me in a permanent state of annoyance. And when you think it can't add another possible obvious musical aspect to highlight where their influences lie, (the band as a collective come from the comparatively un-rootin'-tootin' Northwest state of Maryland), in comes the banjo. But I don't find it annoying. And while I could sit here and analyse why, it boils down to two main reasons.

Musically, a lot of albums I find dull to listen to tend to have too much going on. We all love riffs, but if an album is just a series of riffs played one after the other it all blends together into a dull mess, but there's enough space on here, both in the album as a whole and the individual sections to mean that despite the similarity in style, each song stands up on it's own.

Secondly, and this is the main one; Clutch are fun. There's a strong groove in most of their music that leaves you tapping your foot even if your mind wanders, and if you're lyrically inclined, the vocals are quirky enough to stick with you. Songs like The Soapmakers are catchy enough to be hummable after one listen which is something of an achievement, especially for someone like me who tends to tune out vocals from most music.

So, am I a convert? Nope. A few tracks from Elephant Riders will doubtlessly get a few spins in future if I find myself in the right mood but it hasn't inspired me to delve deeper into their catalogue. They make the most of blues rock but it's not a style I hold much interest in, so while I have a lot of time for a band who manage to make such a well trod genre genuinely interesting, this is more of a respectful nod at a passing vague acquaintance than love at first sight.