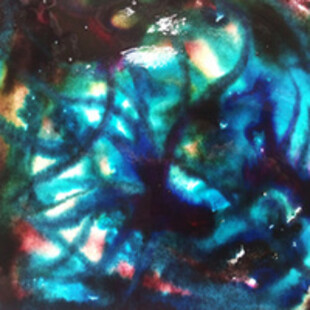 I really like meditative droning music, like this. However, in all the years I've been listening to it, I've never really worked out how to write at length about most of it without lapsing into some stream of consciousness about what it made me think about whilst I listened to it; and throw in some vague existential thoughts just to compound how pretentious I am. On my second listen through, I'm mostly just thinking about my cat, as he came into my room, obnoxiously walked over my boxes of precious vinyl, then decided to walk in circles on my legs for a while before sitting down and staring dumbly at me. He seems utterly indifferent to the music, but looked very alarmed when he heard a cat in the street making horrible noises - presumably in a fight.

With the crackly dying loop-based sound, it somewhat reminds me of William Basinski's Disintegration Loops series - but if the Disintegrations were old James Blackshaw tracks instead of classical piano. It's definitely on the lighter side of ambient, whereas my usual tastes normally lie in the darker vein (think Aural Hypnox label style stuff). It's all rather subtle and organic; and dare I say - nice.The use of field recordings gives it enough depth to maintain interest and ensure it's not one-dimensional droning. Considering it was "recorded as one take improvisations and coupled with field recordings for added depth", it's all feels rather complete. Unfortunately, this is the kind of music that I find usually works better live. Finglebone's site seems to suggest he often does live film scoring, and I reckon I'd appreciate it much more in such a context than when just listening to it through speakers in my bedroom wondering how I'm gonna write much more than 'enjoyable droning ambient!'.

What's a Voorwerp? Hanny's Voorwerp = Hanny's object = A massive and mysterious astronomical object discovered in 2007 centered around a giant hole. Well, the title actually just means 'object', but I'm guessing it's meant to allude to the space object. It's not a terribly psychedelic or 'cosmic' album though - it makes me think more of decaying urbanity.

The EP finished. The cat fell asleep. Your cat can listen to the album here - it's only 20 minutes long, and thoroughly decent; albeit not groundbreaking.