Black Hole of Calcutta Self Titled #2 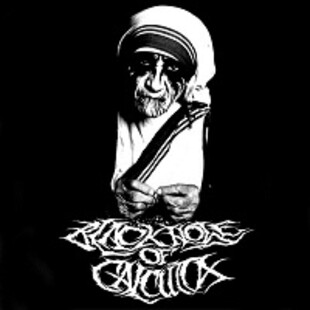 No-nonsense yank ear-wreckers Black Hole of Calcutta play fast, hard and don’t appear to care for narrow genre convention definitions. They’ll happily take elements from other styles without prompting rabid scenesters to announce the arrival of the standard bearers of a new sub-sub-sub- genre. I think it’s safest to call this fast hardcore; not power violence, grindcore, blackened thrashcore or flavour-of-the-month core. They have their own take on the sound rather than simply rehashing iconic bands past or present which to me marks them out as good, forward thinking FAST hardcore.

BHOC have mastered the knack of balancing the full pelt thrash with enough dynamics, sudden stop/ starts and idiosyncrasies to keep the listener gripped and attentive throughout. I must have hundreds of records of bands working in the same ballpark; some far more noteworthy than others but it’s a style that always delivers a surge of adrenalin and keeps me craving more of the fast punk/ hardcore sound. BHOC have spent the last 5 years honing their style into a streamlined powerhouse, resulting in an album both explosive in its impact and memorable in its construction.

Blessed by artwork featuring a fantastic image of a corpse painted Mother Theresa (surely destined to be a T-shirt best seller) this second album contains twelve tracks which only hang around for about 20 minutes. It’s a short sharp shock which easily withstands repeated plays if your appetite for frenetic headfuckery is not satisfied the first time round. Because it’s got enough variety and twists amongst the onslaught, successive listens highlight touches that may have been missed in a distracted moment during previous plays. I won’t dissect teach song in detail; taken as a whole the effect is far greater but here area few noteworthy moments to listen out for…

Opener Myth of Progress is one of those songs which starts off slow but is obvious from the get-go it‘s going to charge full speed ahead before long. This time you get a full one and a half minutes of slow build up before the bomb drops and the frantic pace kicks in with a turbocharged surge. The slower pace eventually lumbers back into focus, wrenching out the track in suitably ugly fashion.

The tightness required to successfully pull off a pacey track with unexpected slow turns like Total Collapse should not be underestimated; when done right (like it is here), the effect is monstrous. Next track Cirrhosis sounds like the bastard offspring of Poison Idea and some unsuspecting Norwegian Black Metaller who ventured too close to the late great Pig Champion when he had the horn. Doesn’t paint a very pretty mental picture but it sounds superb. Each of the dozen outbursts on offer has a finely distilled sense of urgency, positively bursting out of the speakers and demanding that you PAY ATTENTION MOTHERFUCKER.

To summarise; BHOC are comfortably poised to make a positive ripples throughout the hardcore underground and possibly beyond with this release. If you crave some high speed controlled chaos in your life, you’ll be as happy as a pig in plopsies with this.

Forums - Reviews and Articles - Black Hole of Calcutta - Self Titled #2