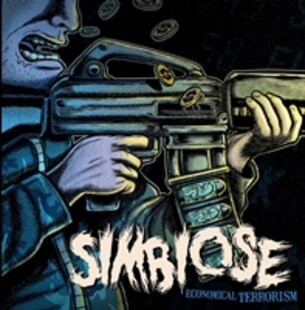 Simbiose are a Portuguese crust band who have been plying their art for more than twenty years.

In that time they've released all sorts of stuff, but Economical Terrorism is their latest album. What we have here is 14 tracks of pissed-off, heavily political and metallic crust. Similar in many ways to Skitsystem or Disfear, the way these tracks tear away from the starting line like they are on fire gives them a frenetic and frenzied feel. Employing two vocalists and two guitarists, taking the line-up to a credible 6-piece means their is nary space to move, the sound is like sandpaper, never-ending and to the point.

The production gives the whole thing a treble-heavy screech that reminds me of the last ten years of Napalm Death, namely, heavy, choppy and cutting. This suits the breakneck speed they clatter through songs, the grinding blast of tracks like Total Descontrolo and Control My Life leap out of the speakers like masked men missioned to throttle you.

Never once sounding generic or repetitive, Simbiose have their identity nailed. While their message may not differ from the majority of crust bands (capitalism is bad m'kay?) they do it with such passion and variation that you'll want to spin this almost as soon as it is over. Out on Rastilho Records, this is one to check out if you have a predeliction for blastbeats, barked vocals and molotov cocktails.