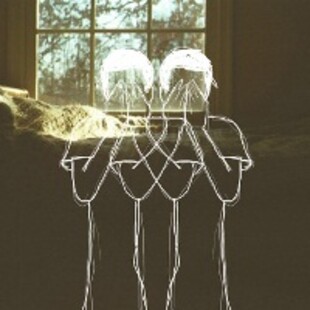 The deal is weird noises and then fragments of actual songs fading in and out in between. A fucked music box and echoes of some toy. Then the drones and noises take a backseat, colouring in the gaps between earnest guitar and lyrics that, as you might imagine deal with sleep. And heartache. Standard faire, but the lyrics are intelligent and off-kilter and do tug at the heartstrings somewhat. Yeah, I'm feeling a memory of pain when he sings, “If you love me, come clean.”

He lingers in this feeling, and you can't help but wonder if this point between sleep and waking, dreaming in the gloaming, is a wallow in depression over lost loves and unforgiven slights. Then he blows the dust off, throws the windows open, “You're the reason that I can't sleep,” and bass drum and guitar sound like they're verging on anthemic, but the windows close and we're back in the dim light of some attic, listening to this man's plaintive words and gentle acoustic guitar, and sometimes we hear him walking around, snips of phone conversations or film samples or something. Eerie, and all filling in the tragic mood that saturates the album.

The majority of the tracks put lie to the claim of it being 'half ambient drone' as the song-writing dominates. The man, Mitch, is not without talent, and the concept of the album is clearly something tragic, as evinced by track titles such as, “it's thursday, january 12th and this the last time i'll talk about drowning,” which by the by has a lovely bit of fuzzy guitar rolling through it.

It's halfway through the album when the drones return, or more what I'd term field recordings, sounds of creaking wooden houses, birdsong, a noodling guitar line threading its way between the sounds. The drones stay, the field sounds go, and the album descends into something dark and funereal.

This tragedy is too much. It's consuming, beautiful, but wearying. For me, albums aren't something I want to get me down these days. Brief visits to the tracks of “sleep” are fine, but driving all the way through the unlucky number of tracks leaves me introspective and in need of a unicorn chaser, some kind of vile pop to scrub my brain of this weary feeling. That said, it is most definitely worthy of a listen. Just, do it when you're in a good mood and have suitable baffles set up to ward off the sinking feeling it induces.