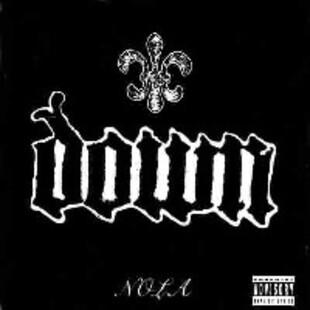 Part 3 of our continuing sonic experiment, in which Gareth turns his bile towards one of the most respected supergroups ever. War Pygmalion is a look back on metal 'classics' that our erstwhile reviewers might not have heard.

Down's first album sees them packing their bongs with leaf and their albums with cliches. I have to hold my hands up from the outset, lest I be accused of bias; I can't stand Pantera. To me, they were always (ignoring their glam metal beginnings) a metal band for people who didn't actually like music but wanted an excuse to wear daft clothes and mutually punch each other in public. They were the football of metal and it makes me sad to think of how much of their music I've listened to over the years when I could have been doing something more spiritually and artistically enjoyable, like pretending Pantera didn't exist or having unneccesary surgery.

The other origins of this supergroup are less well known to me. I'd seen Crowbars Existence is Punishment on an episode of Beavis and Butthead and remember very little about it other than it was possibly the heaviest thing I had heard at the time, the lyrics were a bit girly and that the singer was huge. Various free magazine CD's had introduced me to Corrosion of Conformity. I'd heard Man or Ash and King of the Rotten, and while I liked both, I'd never gotten any further than that with the band. Still, I loaded up Nola with an idea of what I expected to hear, and hear it I did. Seriously, almost from start to finish the record was lowest common denominator southern states stoner with Anselmo's customary vowel mangling about such diverse subjects as alcohol (being drow-ank), weed (smow-ahk), pain (paiyeeeeeen), being from the South and the other stuff that every song he's ever written lyrics for has ever been about. There's probably some stuff about death and/or religion on there too; I neither know nor care.

Aside from the vocals, it's a let down musically as well. The riffs are standard chugging grooves and the high gain guitar sound itself is lifeless. There's also the irritating habit of Keenan and Windstein of harmonising the last part of seemingly every riff, presumably as a result of being so drunk/stoned they temporarily forgot they weren't actually in Thin Lizzy when they wrote it. Rehab at least manages to be halfway decent, incluidng a couple of shifts in timing and mood, although anything that isn't the facepalm-tastic Hail the Leaf, an ode to weed with it's middle 8 sample of a bong being drawn on was always going to sound mature and nuanced.

Jail is a restrained, almost delicate number, the modulated vocals and the guitars giving the album a rare glimpse of melody over some interesting percussion and synth noise effects. It's a far cry from the rest of the album and easily the best thing on the record.

After producing Nola, the band went back to their day jobs. Crowbar carried on doing whatever it is Crowbar do. (I admit I maybe didn't research them as well as I might have done). Corrosion of Conformity went on to release the excellent-from-what-I've-heard Wiseblood and Pantera continued to produce nothing worth listening to. Even by their own fans standards they somehow got worse as their career continued, lowering the bar of acceptability to Mariana Trench levels for chuggalug angst metal and Digitech Whammy pedal twattery, resulting in bands like Avenged Sevenfold, Trivium and Attack Attack!. Cheers for that.

It's been 16 years since Nola was released and this is the first time I've heard it. I have not been missing out. Bias aside, it's a dull, unimaginative record, inexcusable for anything that purports to come from a "supergroup". Also, I have also run out of anything I can think of to say for traditional stoner music so further "classics" had better be more adventurous than this. Now excuse me, I have to drive a 2 and a half hour round trip to Lincolnshire at 10pm on a Saturday night to return this record to it's owner and basically get it the fuck out of my house.